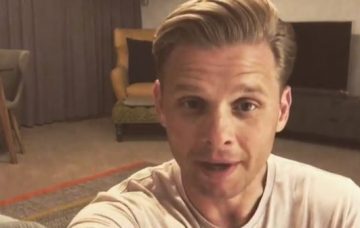 Jeff Brazier has revealed his pride after youngest son Freddie paid for lunch after school.

The television presenter said he was blown away by the 13-year-old’s kind gesture after he jokingly asked the teenager to put his hand in his pocket.

Jeff has raised Freddie and his brother Bobby, 14, as a single dad ever since the boys’ mother, Big Brother icon Jade Goody, died from cervical cancer in 2009.

In his daily video on gratitude posted to Instagram, Jeff told fans: “Freddie bought me lunch. I kind of said to him jokingly, it’s lunch, after school, let’s pop to a cafe and said, ‘Oh, Fred, can you pay for this for once?’

“He actually pulled a couple of quid he had in his bag out and paid for it. I was really grateful my little boy was kind enough to say, ‘Yes, dad, I’ll get this one.'”

One fan replied to Jeff’s video by saying: “Beautiful Jeff your Freddie is so lovely.”

Today I got fixed and treated to some after school refreshment by my son. Press ▶️ for more..

Jeff has often spoken of his pride in both Bobby and Freddie, and is frequently praised by fans for raising the two boys so well.

He has been their sole carer since their mum, Jeff’s ex-girlfriend Jade, passed away on Mother’s Day when Bobby and Freddie were just five and four at the time.

Just last month, the former Shipwrecked star revealed how eldest son Bobby was determined to follow in his dad’s footsteps by raising awareness for cancer and the importance of regular health checks.

Bobby’s decision came after he watched Jeff take part in ITV’s The Real Full Monty: Live, where a group of male celebrities stripped on stage to raise awareness of men’s cancers.

Jeff revealed how he’d got a text from Bobby right before going on stage, which meant the world to him.

“I’m grateful that my son put it into perspective for me by texting me probably about ten minutes before we performed, telling me he was really proud of me and I was a ledge for doing it.

“And he said I should tell Ashley [Banjo, the choreographer] that in a few years’ time, when he’s old enough, he will want to help carry on his mum’s legacy.

“It just absolutely floored me emotionally and turned the performance from performing a routine into something far greater and bigger than something I ever really imagined it would be.”

The two teenagers will serve as joint best men.

“They’ll pull something out of the bag. It won’t be all deep and meaningful. I’m sure they’ll chuck a load at me!

“But those words will mean something.”