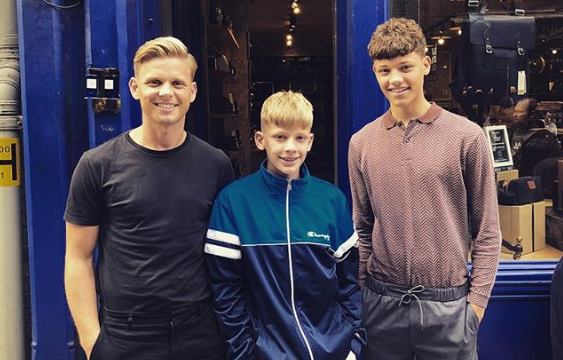 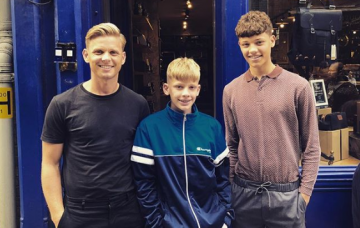 He's offered sweet words of comfort to his followers too

Jeff Brazier shared a beautiful picture of his sons on Christmas Day, as they released balloons at the seaside.

Alongside the image, he wrote: “Thinking of everyone who is thinking of someone.”

His boys Freddie and Bobby were clearly spending some time thinking of their darling mum, Jade Goody.

Thinking of everyone who’s thinking of someone. 👊🏻🙏🏻

Ahead of the festive break, Jeff had revealed that Christmas is still all about Jade for his sons.

She passed away in 2009 at the age of 27 after being diagnosed with cervical cancer and Jeff, who raises their sons Bobby, 15 and 14-year-old Freddie, has revealed that it took them some time to figure out how to handle Christmas without her.

In a video on Twitter, he explained: “It took two Christmases to work out that it didn’t matter how many presents we had under the tree.

“If we didn’t recognise their loss then it felt like there was an elephant in the room.

“We make the day about the loss first and foremost, their mum, and make it about the occasion secondary to that.

“My children want to celebrate Christmas but it’s just different. But it’s OK that it’s different.”

Jeff also praised Jade for how special she made Christmas for the boys when she was alive.

He said: “I was never as good at Christmas as Jade was.

“She went to extreme measures, she made fake footprints in the snow. It’s not something I would go to that length to do because I’m not as creative as Jade was.”

And Jeff revealed that although Jade has been dead for almost 10 years, the grief is still raw for their sons.

That chat i promised about how to navigate Christmas when you’ve suffered a loss. 😥👊🏻 https://t.co/uvo76qR6g8

He said: “You might think 10 years later it’s surely going to be calming down a bit and they’ll be used to it and it’ll cause them less pain.

“But the truth is they’re going through teenage changes.

“You know you love your children. But what happens when the unknown starts to present itself? What do you do when they’re crying for their mum?

“What do you do when they’re being naughty because they’re upset about losing their mum?”

Jeff tied the knot with his long-term partner Kate Dwyer in September and he previously praised the PR director for bringing “stability” to his life and that of his two sons.

He said: “I’m so happy to marry Kate, who has brought so much stability to my life. This isn’t just any wedding, this is a really special one.

And Jeff praised Kate for making his family “complete” and helping his sons feel like they belong.

He added: “Before it was just three boys rattling around in a house on our own, trying to get through life.

“Then Kate came along and worked so hard at making us complete.

“She hasn’t just completed one person, she’s completed a family and given three boys a real sense of belonging.”

Bobby and Freddie were joint best men at the ceremony at the luxurious Tivoli Carvoeiro resort in Portugal.

How do you navigate Christmas with a loved one gone? Leave us a comment on our Facebook page @EntertainmentDailyFix and let us know.