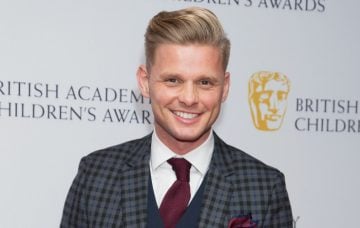 Thanks fans for their interest in his "little story"

Jeff Brazier has taken to Instagram to thank his fans for the messages they’ve sent him after his marriage to Kate Dwyer.

The reality star posts a daily video series called “One Minute Of Gratitude” to his Instagram account, and dedicated his Monday video to his supportive fans, after he released the first images of his wedding.

“Just a little one minute of gratitude to say thank you to everybody who’s sent such kind, lovely messages to Kate and I about the wedding pictures in Hello that have come out today,” he said.

He went on to say that he was looking forward to sharing the response he and Kate have had with their grandchildren.

“It was a really special day with all my favourite, favourite people around me, and as a result to look back and share that with, as Kate just said, our grandkids one day will be really lovely,” he said.

“The magazine is great, but nothing compared to the actual day itself and how we felt and how well the boys did and just how perfect it was to have all my best friends around me.”

Dedicating my #oneminuteofgratitude to anyone who kindly commented on our wedding snaps in @hellomaguk this week. Thank you for sharing an interest in our little story and always wanting the best for my children.❤️

In the caption of the video he thanked fans for their interest in his and Kate’s “little story.”

“Dedicating my #oneminuteofgratitude to anyone who kindly commented on our wedding snaps in @hellomaguk this week. Thank you for sharing an interest in our little story and always wanting the best for my children.”

Jeff and Kate shared the first images of their wedding with Hello! magazine, commenting on their joy at tying the knot.

“This isn’t just any wedding, this is a really special one,” Jeff said. “It doesn’t just represent Kate and I putting rings on each other’s fingers.

“It represents the fact that we won at something really tricky. We won at becoming a family.”

Jeff’s two sons, 14-year-old Freddy and 15-year-old Bobby, also commented on the marriage, saying they were glad their dad had found Kate.

“One of the biggest things for Fred and I is that Kate makes our dad happy,” Bobby said.

They served as joint best men.

Jeff has been raising the two boys alone since their mother, Jade Goody, died in 2009.

What did you think of the wedding pictures? Leave us a comment on our Facebook page @EntertainmentDailyFix and let us know what you think!