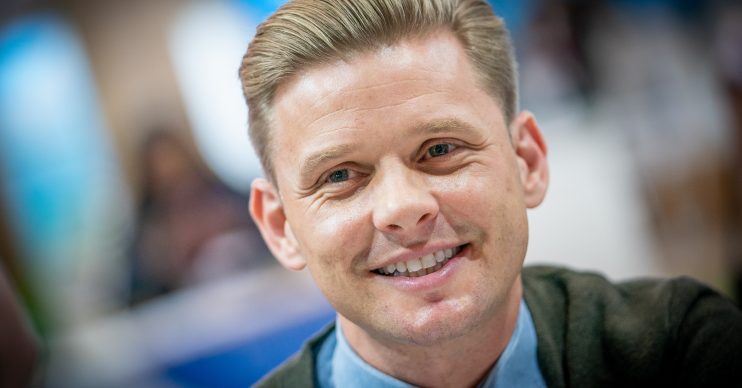 His new haircut is very different

TV presenter Jeff Brazier‘s new hairstyle has been given the thumbs up from fans on social media.

The 40-year-old joked he’s having a ‘midlife crisis’ on Twitter this morning after unveiling the dramatic new look to his near 500,000 Twitter followers.

And that’s because his new ‘do is very different to his backcombed, bouffant locks of old… Jeff now sports short hair very similar to that of his youngest son Freddie!

Posting a snap of himself side-to-side with a pic of his 15-year-old lad, This Morning correspondent Jeff wrote: “Might have copied Fred’s style a bit. Midlife?”

Funny times. Bobs learning to DJ, he’s retained pretty much all of the best music that I’ve played over the years and thrown in some of his own stuff so he’s teaching me now. He’s turning into his brothers guide taking the time to advise not criticise and it’s beautiful to watch. Freds in the middle of teenage disarray but we’ve got him. Futures looking fun ❤️

He also included a shrugging emoji and a winking emoji next to his caption, indicating his light-hearted approach to the cut.

The reaction from his fans on Twitter was largely positive – although a few responding to his tweet weren’t entirely convinced.

Definitely prefer it before, sorry!

“Wow bloody love this on you,” commented one supporter.

“Looks good and I love those glasses!” wrote another, adding a thumbs up emoji.

Might have copied Freds style a bit. Midlife? 🤷🏼‍♂️😉 pic.twitter.com/BACZjF1HN2

A third person bantered: “Haha, I think you’ve pulled it off ok. Only just.”

However, there was one fan who objected to the change, saying: “Definitely prefer it before, sorry!”

And another person – why may be pals with Jeff – was hit with a friendly comeback after giving Jeff a bit of lip.

“Sorry to say Fred pulls it off better mate,” the person replied to Jeff’s original tweet.

But Jeff fired back: “Pipe down potato head.”

And there was even one fan who reckoned Essex-born Jeff’s new appearance made him look like a certain TV and film favourite.

“You look like Tom Shelby off Peaky blinders,” they claimed.

‪This Saturday was my 6th and final week co-presenting @btsportscore with the lovely @julesbreach and what can I say, the experience was invaluable, the company always a privilege and I’ll use everything I’ve learned to continue to grow and improve as a football broadcaster. ‬