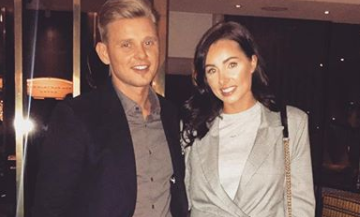 Could they return to Portugal for the big day?

Jeff Brazier and his fiancée Kate Dwyer have jetted off for some quality time together in Portugal.

The couple have shared sunny images of their time away with their Instagram followers, showing them beside the sea and heading out as the sun sets for evening meals.

Could their trip have also involved some wedding planning?

After all, Jeff told Hello! magazine their big day would be somewhere hot this summer, though neither he nor Kate has actually confirmed just where!

Kate hinted it could be Lagos, where they spent the last few days, as she shared an image of just her and Jeff’s legs as they relaxed at the beach.

Oh I do like to be beside the seaside.. 🇵🇹

She made sure her hand was rested on her leg in the shot to show off her dazzling diamond engagement ring.

“My favourite place in the whole world,” she captioned the picture. So could it be the place where she wants to tie the knot?

Meanwhile, former Shipwrecked star Jeff was particularly proud of one picture he took of his wife-to-be gazing out to sea.

He wrote beside the image: “There you go @katedwyerpr here’s your profile pic for the rest of your life #smashedit”

The 38-year-old also shared a video from Lagos where he told his fans what he’s grateful for that day.

Jeff encourages his followers to spend time every day thinking about what they have to be grateful for, a technique he’s said helped him since his two sons lost their mother, Jade Goody, in 2009.

He’s become a life coach and does seminars to help people come to terms with grief.

He’s also a keen advocate of cancer charities, after Jade lost her life to the disease. Last month, he took part in The Real Full Monty Live to raise awareness of the importance of regular health checks.

Jeff has often spoken about how hard it has been for his two sons, Bobby, 14, and 13-year-old Freddie, growing up without their mum.

But he said PR executive Kate is doing a great job as their stepmum.

“It’s a massive responsibility for Kate but she’s been around us for over four years now. She’s perfect in that role,” he previously told Loose Women.

Jeff popped the question when the pair where in Ibiza last year, after meeting five years previously when he was filming for ITV in the Maldives and Kate was working on PR for the hotel where he stayed.

They haven’t disclosed details of their forthcoming wedding day but Jeff has already enjoyed his stag do.

He went skiing in France with a group of friends last month, who made him dress up in a gimp suit one day.

“Here’s a picture I didn’t imagine I’d be sharing,” he told his fans showing himself at a bar in the outfit.

“What a wonderful imagination my friends have! Once I’d got past the initial apprehension you typically get when dressing as a gimp for the first time I actually learnt to own it. Alcohol helped.”

Once they have tied the knot, Jeff has said he and Kate would love to have a child together.

“We will. That’s a definite. As to when, I suppose Kate is the boss on that one!” he said.