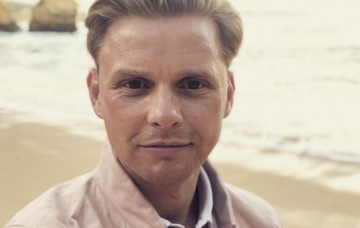 The reality show that made him famous is coming back...

Channel 4 has confirmed its popular show, Shipwrecked, will be returning this summer, and ex-contestant Jeff Brazier is having all the feels!

Reposting the channel’s advert for new Shipwrecked contestants, Jeff wrote, “Mixture of emotions going on here. 17 odd years ago I was on this show and it turned out to be beyond special.”

And as the advertisement states that contestants must be ’18-30′, now father-of-two Jeff, who is loved-up with fiancée Kate Dwyer, isn’t happy!

He added, “Now some other lucky people are going to do it and I’ll be so jealous! That said, I’m sure it’ll bring on some pleasant memories.”

Jeff added the hashtags ‘can I do it again’ and ‘No, you’re too old son’.

Fans were delighted by the news, with one remembering the camp divide of ‘sharks’ or ‘tigers’ and others reminiscing about how much they loved the guilty pleasure TV show.

“That was life, lol. Sharks or Tigers, that was always the question,” wrote one fan of the show.

Others, like Jeff, were miffed when they realised they were now too old to apply.

“If only I was 6 years younger,” bemoaned one follower, with another adding, “I’m too old to apply”.

However, Jeff may be returning to the island where he first made his mark as a celebrity.

He told Heat magazine, “When I went on Shipwrecked, we stayed on an island called Yaukuve in Fiji. It’s such a beautiful place.

“It turns out it’s now a six-star resort called Kokomo Yaukuve. I think I’ll do it for my 40th birthday.”

Although this time around, we hope the menu on the tropical island is a little more tempting!

He added, “I lived off yams for seven weeks. We had to find them, clean them and cook them. When I got to the final, we were given rice, which felt like the biggest luxury.

“When I see people complaining about rice on I’m A Celebrity, it always makes me angry.”

Would you apply for Shipwrecked? Or will you be enjoying watching from the comfort of your sofa? Leave us a comment on our Facebook page @EntertainmentDailyFix and let us know what you think!