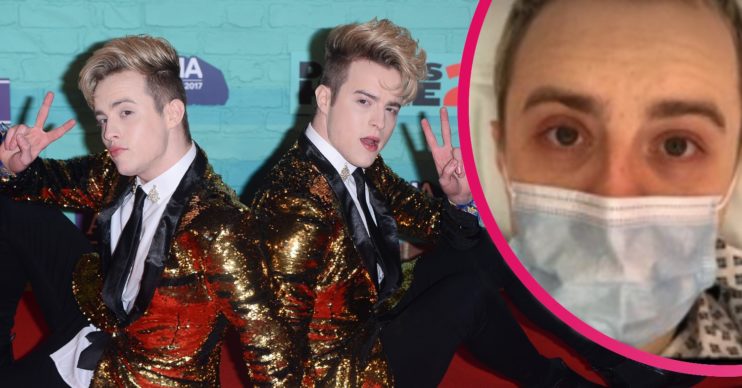 But it didn't stop him from enjoying Eurovision!

Jedward star Edward Grimes was rushed to hospital on Saturday.

The singer, 29, went to hospital with extreme stomach pains.

And it turned out the singer needed life-saving emergency surgery.

However, Edward, who is part of the iconic pop duo Jedward with his twin bro John, still managed to watch Eurovision.

Edward wrote on his Instagram Stories: “Just had immediate surgery to remove my appendix.

“It was a life threatening and scary situation but I’m grateful the emergency team have operated on me and stopped the agony.

“I’m healing and on the road to recovery!”

He then thanked his fans with: “Thank you for your caring messages.

“I’m urging everyone to please take severe pain in the abdominal area serious as I’ve ever experienced excruciating pain like this and knew something wasn’t right.

“Blood tests and CT scans indicated I needed surgery. I’m grateful it was caught in time.”

He also joked about a nurse having to fit him with a catheter that he was “a grower”.

Despite all of this, he still managed to watch Eurovision from his hospital bed.

Edward lamented: “Of all times of the year it had to be Eurovision night here alone not watching it with John and my family and dogs.”

Indeed Eurovision has a special place in the brothers’ hearts as they represented Ireland at Eurovision for both 2011 and 2012.

Jedward are a pop duo made up of Irish twin brothers Edward and John Grimes.

They shot to fame in 2009 when they competed on The X Factor.

They managed to reach sixth place in the competition and Louis Walsh served as their mentor.

The pair have gone on to release four albums and competed in Celebrity Big Brother in 2011.

It was here that they befriended their fellow contestant, American Pie actress Tara Reid.

They’ve not only remained close buddies over the years, but Jedward moved in with Tara during lockdown.

For two weeks of quarantine in the US, the brothers stayed with Tara at her Los Angeles home.

Tara told the MailOnline of the experience: “We ate so much because we had nothing else to do… and the twins eat more than anyone, it’s insane!”

Then adding: “We’d watch movies together, we’d hang out and eat, John would be off playing guitar, we’d be working, we did our own thing!”