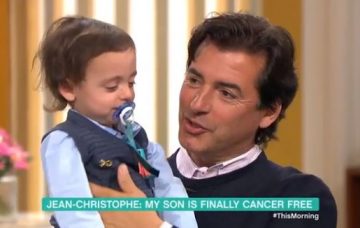 Valentino joined his parents on Wednesday's This Morning

Celebrity chef Jean-Christophe Novelli and fiancée Michelle Kennedy have spoken of their joy at celebrating son Valentino’s second birthday after he was given the all-clear from cancer.

The little boy was diagnosed with rare neuroblastoma cancer in 2016 when he was just ten weeks old.

Valentino endured gruelling chemotherapy and lengthy hospital stays before his family were given the incredible news last year that he is now cancer-free.

The two-year-old joined his parents on ITV’s This Morning on Wednesday, where they spoke about their ordeal to raise awareness for Children’s Cancer and Leukaemia Group and Childhood Cancer Awareness Month.

He was given a shiny new birthday present to keep him entertained while Jean-Christophe and Michelle spoke about the agony of his diagnosis and their relief at him coming through the other side.

Jean-Christophe explained how they’d found a lump on one side of Valentino’s neck while Michelle was feeding him just a month after he was born.

Read more: This Morning to be honoured with special anniversary award

They took him to A&E and were given the dreadful diagnosis two days later.

Michelle recalled: “The MRI revealed he had tumours all around his neck, like a coiled snake, too dangerous to operate on.”

She continued: “It was awful. It’s still there in his neck but it’s shrunk right down now after chemotherapy. He coped [with the chemotherapy] like all the other children we met at the hospital.

“They suffer, really suffer with it. It’s horrendous, sickness and blisters in their throat. It’s a poison isn’t it? It’s so awful.”

Michelle said the couple had to “split their responsibilities” with Jean-Christophe focusing on their other two children, Jean, ten, and Jacques, six, while she stayed at the hospital with Valentino.

They suffered a further scare when Michelle was diagnosed with a blood clot in her leg which required surgery.

“I don’t know if it was the stress of the situation or one of those things,” she said. “I think it was probably something to do with [hours sitting by his bedside]. It had to be operated on and thankfully they managed to save my leg and everything was well. But I was separated from Valentino for ten days and that was difficult.”

The couple said they didn’t celebrate Valentino’s first birthday last week as it was too raw and sensitive, given they were unsure about his condition.

They said the eventual news he was cancer-free was a relief as they endured a scare shortly before with doctors telling them the curren chemotherapy plan wasn’t enough and Valentino needed stronger chemo.

“It was a fraught time for us,” said Michelle. “In this type of neuroblastoma with babies under 12 months there is a much higher survival rate but with toddlers it’s a lot more treatment and sadly less of a survival rate.”

They celebrated Valentino’s birthday surrounded by loved ones at the weekend, with Jean-Christophe saying: “When everyone was singing Happy Birthday you could see the [happiness] in his eyes for the first time ever. It was fabulous.”

Michelle added: “It was a way to thank our friends and family as well for the love and support and prayers they have given us.”

Read more: Richard and Judy return to TV for This Morning documentary

As well as praising the Children’s Cancer and Leukaemia Group, Jean-Christophe also thanked the NHS for “doing a fantastic job” and helping the family throughout their ordeal.

Phillip pointed out that now Valentino is back home, the couple – who became engaged in 2007 – may be able to start planning their wedding.

Michelle replied: “Yes, finally if there is no more drama.”

Did you watch Jean-Christophe and Michelle’s interview on This Morning? Leave your thoughts on our Facebook page @EntertainmentDailyFix.