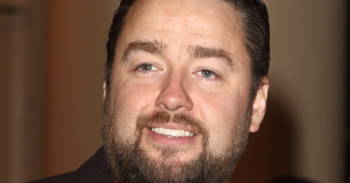 The comedian took to Twitter to explain the awkward shoutout

Jason Manford really doesn’t want any of his fans to think he would ever utter a bad word about late TV legend Sir Bruce Forsyth.

The comedian, 37, took to Twitter on Saturday to clear up the “sinister” shoutout he gave the much-loved entertainer during his stand-up show the previous night.

“Loved doing my show at the London Palladium last night,” he began. “Gave a shoutout to Sir Brucie at the end but realised afterwards it might’ve sounded more sinister than it was meant.

“I said ‘and a huge round of applause for Sir Brucie, who’s down there now.’

“What I was referring to was that his ashes are under the Palladium stage, cos obviously Forsyth is very much UP in entertainment heaven somewhere.”

But it appears no one actually thought it came across as “sinister” at all, with one fan simply replying: “Fab show!”

Another said the TV icon wouldn’t have even taken offence, writing: “Brucie would have seen the funny side of it @JasonManford and will be laughing and smiling.”

Brucie would have seen the funny side of it @JasonManford and will be laughing and smiling. 🤣

The Strictly entertainer, who passed away in August 2017, had his ashes laid to rest under the stage at the London Palladium exactly a year after his death.

His plaque says he was “without question the UK’s greatest entertainer”.

It concludes: “He rests in peace within the sound of music, laughter and dancing… exactly where he would want to be.”

Jason has been performing Muddle Class, a tour about his confusion over the fact he’s no longer working-class but now middle class, since early last year.