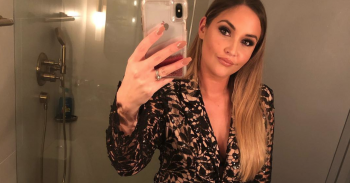 She and her husband have been dogged by 'split' rumours

It’s been a dizzying couple of days of “spot the ring” for Jaqueline Jossa fans, as the rumour mill has churned over the state of her relationship with husband Dan Osborne.

The EastEnders star has taken to Twitter to ridicule claims that she’d removed her wedding ring after jetting off on holiday with her friends.

Read more: David Beckham’s sons feared they had let their dad down when they quit football

The actress posted a series of videos to Instagram Stories last night, as she headed off on a night out – and a shot of her hand became a news story.

As she raised a hand to push her hair out of her face with what looked like her left hand, it was apparent that she wasn’t wearing her wedding ring.

As she showed her empty hand, Jacqueline talked about her attitude to jewellery, saying she doesn’t wear it by habit, so feels like a different person when she does.

“I don’t wear enough jewellery so when I do I just feel like a different person,” she said. “I look like I’m trying too hard.

“I look back and think who is that girl, who is she?”

The actress appears to have left for a weekend away, after her and a friend were spotted arriving at London City Airport yesterday.

Several reports have taken her videos as an indication that her marriage is over, with The Sun taking it as confirmation of a split.

But Jacqueline has hit back at the rumours, with a simple technical explanation – she was using the forward facing camera on her phone, which flips shots like a mirror image.

“Why are some people so painfully stupid?” she asked. “I was wearing my wedding ring last night. [In] my Insta Stories I’m using the front camera… it’s my right hand!”

She went on to rebuke accusations levelled at Dan after pictures taken of the boot of his car showed a Michael Jackson CD.

The late pop star has come under scrutiny in recent weeks after a documentary explored renewed accusation of sexual assault, and some have claimed that it’s inappropriate to still be supporting his music – but Jacqueline called the situation a “non story.”

Dan himself has hit back at the accusations on Instagram stories, claiming that plenty of people will still have old CDs.

“Am I the only person in this country now with an MJ CD?” he said.

Rumours spread this week that Jacqueline and Dan had had split over accusations that he’d kissed Love Island star Alexandra Cane on a night out.

Reports claimed that Dan had been kicked out of the family home after the allegations came to light, with The Sun reporting that the pair had told their friends their relationship was over.

But the pair denied the reports, with Dan taking to Instagram Stories to deny the incident ever took place.

“A lot of you might have seen the story going around online today. It’s a load of rubbish,” he said.