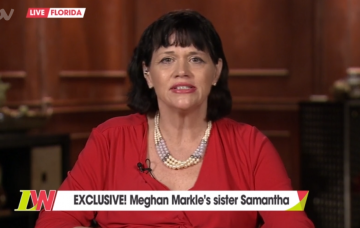 Jane grilled Samantha on her father

Speaking live from Florida via video call, Samantha said she has no hard feelings about not being invited to the couple’s nuptials.

But during the interview, panellist Jane Moore clashed with Samantha over allegations that their father, Thomas Markle, staged paparazzi photographs that were then shared to the media.

One of the photographs shows Thomas surfing the net for pictures of Harry and Meghan, while another shows Thomas apparently being measured for a suit.

Jane asked Samantha: “Have you spoken to your father about this?”

“I have,” Samantha replied. “I have to say I am entirely the culprit.

“As we know the media can take very unflattering photographs of people on their casual days and blow it way out of proportion,” she continued. “I said, you know, the world has no idea you’re getting in shape, doing healthy things.

“So I suggested it. There’s a lot of scrutiny that it was money motivated, it was not. It was my suggestion to benefit him and the royal family.”

But Jane demanded to know if Thomas had received any money for the shots.

“Samantha, are you categorically saying that your father did not receive any money at all for taking part in those photos?”

“I don’t believe so,” Samantha replied. “That was not the motive…”

Jane interrupted: “Not you don’t believe so, are you categorically saying he didn’t? You’ve spoken to him, so I assume he must have told you either way.”

“I have no idea but if he did I’m going to assume it was a pittance,” Samantha said. “They don’t pay that much. It was really so that the world could see him doing the healthy things he enjoys doing.”

Jane continued to grill Samantha asking if she understands that it’s a “very awkward” situation for Meghan and Kensington Palace.

After a short pause, Samantha said: “I see how that would be awkward but on the flip side of that, it’s quite atrocious that the media makes so much money off of preying on innocent people.”

“But Samantha, forgive me,” Jane cut in. “That’s a little naive. Your father is 63 years old and has worked in Hollywood all his life.

“It would be very naive to think that he was not going to get some media attention.”

The chat became even more heated when Samantha hit back: “Let me clarify, he’s 73 which makes him more fragile. I feel like the media have unfairly preyed on him.”

Earlier in the interview, Samantha spoke about not being invited to the wedding and admitted she’s “not taking it personally”.

When asked if she was hurt about not receiving an invite, Samantha added: “On and off I would be lying to say we weren’t.

“For some of us the travel is not very easy. I am in a wheelchair. I had to evaluate even if I had been invited, it would have been a bit difficult.”

Samantha added that she will still be watching the nuptials on Saturday.