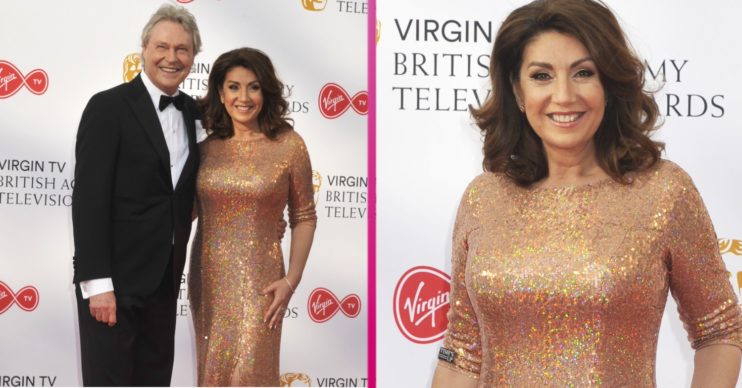 Jane McDonald has made a public vow to live life to the fullest after losing her partner Eddie Rothe.

The much-loved singer lost Eddie in March after a battle with lung cancer.

At the time, Jane shared her “immense sadness” with her fans, who quickly rallied to support her during in her grief.

What did Jane McDonald say about Eddie Rothe?

The 58-year-old singer from Wakefield has been reminiscing over the recent year and vowed to focus on making the most of what comes next.

In a recent interview, Jane said: “If we know anything about what has happened in this past year, it’s that life is too short.”

She added: “This has taught me that life is for living and I will live it even more when we are allowed out again.”

The statement comes as the singer announced the latest series of Cruising With Jane McDonald will be the final season. The upcoming series will see Jane on both a Caribbean cruise and on a trip along the Thames with friends.

Whilst Jane might be stopping the popular Channel 5 series, she isn’t giving up on the cruising high life just yet.

If we know anything about what has happened in this past year, it’s that life is too short

The star will still go on cruise holidays but as a guest!

She said: “Cruising is in my blood. It has made me everything I am, has cruising. It will be nice to go on holiday instead of filming one.

“To sleep in and have breakfast in your room, whereas I am up at 5.30am every morning to get ready for everything we have to film in one day.”

When did Eddie Rothe die?

Jane’s partner Eddie died on March 26 after a lengthy battle with lung cancer. The pair had first dated as teenagers before reuniting 30 years later. They announced their engagement in 2008.

At the time of Eddie’s death, Jane took a step back from social media as the news broke before returning to the limelight for work.

She returned to the spotlight with a career announcement as she revealed she would be performing on the island of Rhodes in 2022.

Posting to Twitter, a statement read: “Join Jane McDonald as she performs her spectacular show at the Akti Imperial Deluxe Resort on the beautiful island of Rhodes in May 2022.

“Enjoy four fabulous evenings with Jane and her live band.”

Fans won’t have to wait until 2022 to see Jane though, as the singer is also due to be out on tour this summer with her Let The Light In tour.

She’ll also be performing a special Christmas show in Leeds in December.

The new series of Cruising with Jane McDonald airs Sunday 9th May at 9pm on Channel 5.