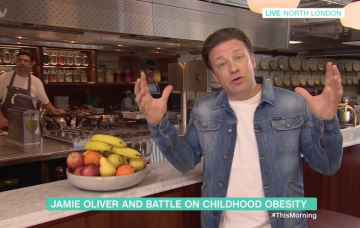 TV chef is sending a letter to Theresa May today

The campaigner is sending a letter to the Prime Minister demanding 13 measures, including an end to commercials for unhealthy food and drink before the 9pm TV watershed.

He is also demanding that the Government makes it illegal for celebs, fictional characters and cartoon favourites to promote fast food and high-sugar and fatty snacks to children.

If he succeeds, it would mean an end to Gary Lineker’s Walkers crisps adverts and commercials featuring Tony the Tiger and Ronald McDonald.

Speaking on ITV’s This Morning about the letter, which has been signed by Opposition leaders, Jamie said: “This is a breakthrough today because very often when we’re talking about child health, politics gets in the way.

“It’s an amazing moment for us. If there is any conversation about a relevant strong and stable Britain then you have to protect child health.

“We currently have junk food advertising that protects kids up until 6pm. What we’ve proved is that’s not where the kids are.

“The kids are on screens, on phones and they’re watching the big shows, like Britain’s Got Talent and X Factor.

“If you watch a whole season, by the end of that season you’ve watched a feature film-length amount of junk-food advertising.”

The chef, who famously campaigned to get Turkey Twizzlers off school menus, added: “If you’re trying to sell a product, you can be very specific about who you target. It’s not morally right to target children.”

He said women had been “let down over the last 40 years” by successive governments who took their taxes, as more and more mums went to work, but hadn’t invested that money in measures to help them raise healthier children.

This Morning host Holly Willoughby said a recent study revealed that Britain’s children were among the fattest in the world and the most overweight in western Europe.

Are you with Jamie on this? Leave us a comment on our Facebook page @EntertainmentDailyFix and let us know what you think!