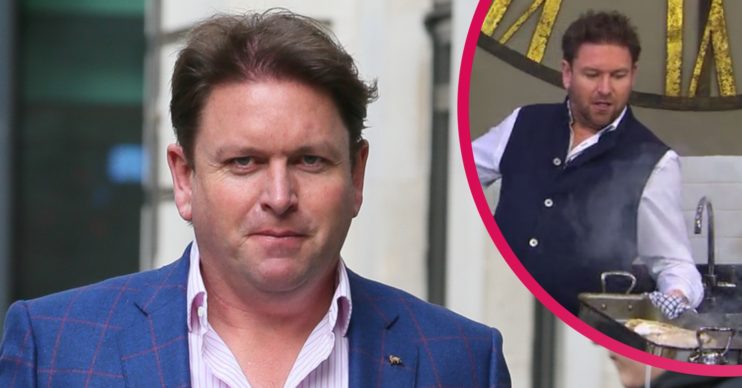 He's been a telly favourite for nearly three decades

James Martin has today celebrated a milestone in his TV career with a special message.

The chef told fans on Saturday (March 27) it was five years since he moved on from the BBC.

But he also noted how time has flown since he made his TV debut on Ready Steady Cook in the ’90s.

Addressing the anniversaries, the star posted pics of him on his current show Saturday Morning with James Martin.

He wrote on both Twitter and Instagram: “Just a message to you all to say thank you for watching and supporting me over the years.

“This weekend is five years since I changed direction and left my old show… yes, five years!”

James continued: “It’s also 28 years next week… yes, 28 years… since I hit the small screens with a bandana.

“Thank you for everything and for all your support, have a wonderful weekend all, big love.”

Just a message to you all to say thank you for watching and supporting me over the years. This weekend is 5 years since I changed direction and left my old show …yes, 5 years! It’s also 28 years next week…yes, 28 years…since I hit the small screens with a bandana. Thank… pic.twitter.com/LwKz0cTSck

Fans responded to James’ heartfelt words with affection and admiration.

And many also insisted watching him at work had become a staple of their TV viewing.

“Where would we be without you on Saturday?” one person replied on Twitter.

“Not only good cooking, but great banter and the intro to some amazing people.

“Don’t stop, what you do is spot on. You are a catalyst for good things, James.”

I feel like a guest rather than a viewer.

Another social media user gushed: “Followed you all the way through from your bandana days to now, even made it to your restaurant in Manchester.

“Love watching you and your buttery cooking. Long may it last!”

A third person added: “Your Saturday Morning show is literally the highlight of my week!

“I love sitting down with a cuppa after the madness of the week to just relax. It does make me hungry though.

“Bloody well done on a fabulous switch. And congrats on life after the bandana!”

And a fourth person also echoed how James’ serene manner put them at ease.

They tweeted: “Love the shows from Ready Steady right through.

“The clear respect and affection for fellow chefs and friends is lovely to see. I feel like a guest rather than a viewer.”

Among the dishes James tackled on his show today were monkfish with Bordelaise sauce and mushrooms and pork fillets with prunes and Armagnac.

– James Martin’s Saturday Morning airs on ITV, Saturdays, from 9.30am.