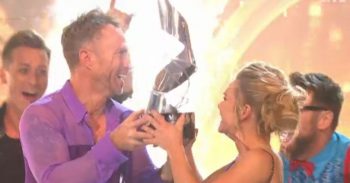 It was a spectacular final

They lifted the trophy following a hard-fought competition against Wes Nelson and Vanessa Bauer.

The night saw each couple perform three routines, including their own take on Torvill and Dean’s iconic Bolero.

Lifting the trophy, James – who was nursing a shoulder injury said: “I can’t believe it. Oh my Gosh. I couldn’t have given it any more.”

After James and Alexandra performed their Bolero, Christopher Dean told them it was one of “the best” he had ever seen performed in the history of the show.

And when Wes and Vanessa left the ice after their own final skate, the Love Island star admitted their routine had been one of the highlights of his life.

He said: “I can’t describe the feeling, that was the best thing I’ve ever done.”

Earlier in the evening, Saara Aalto and her partner Hamish Gaman finished third following a fun-filled routine to Britney Spears’ Circus and their favourite routine of the series, Puppet on a String from week five.

Although they missed out on a chance to perform their Bolero routine, they weren’t too upset.

After the result was announced, Saara said: “I feel so good, this was the best night for us. thank you Hamish.”

The final also saw the return of all this year’s contestants and their professional partners as they took to the ice for one last skate.

Following a week of uncertainty following her row with Jason Gardiner, Gemma Collins did make it back to take a spin with Matt Evers.

Opinion was mixed as to whether the best man won…

#DancingOnIce would have been happy whether #Wes or #James had won. Best 2 by a mile we’re in the final & that’s what it should be. Never been a fan of #James in #Strictly. Thought he was a bit of a troublemaker but he did deserve to win & he seems to have learnt to behave😉

As much as I like James he shouldnt have won. Yes hes good at it but he is a professional dancer so had an advantage compared to Wes and Saara. Wrong public decision again @dancingonice #DancingOnIce

Has been one of the best @DOI2019 i have ever seen.. Wes and James were both winners in my eyes!! and torvil and Dean were amazing to watch tonight! Roll on next year #dancingonice @WesNelsonUk @The_JamesJordan well done xx

Are you happy with the outcome? Leave us a comment on our Facebook page @EntertainmentDailyFix and let us know what you think