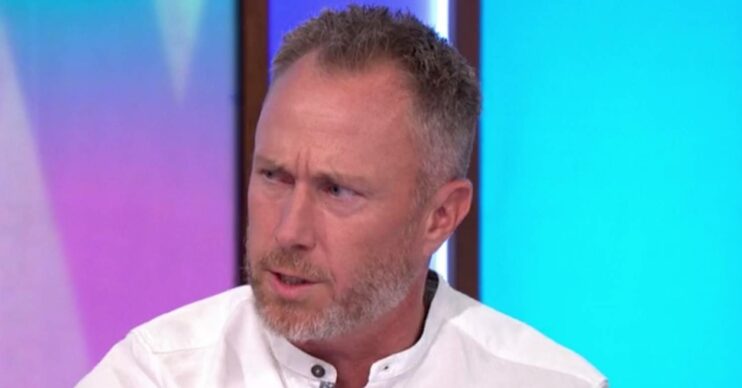 Down to his underwear for a daddy-daughter boogie

James Jordan showed off his ‘dad bod’ weight gain on Instagram yesterday (Tuesday July 26) as he danced with his toddler Ella.

Just a day earlier, he and wife Ola Jordan opened up about their weight gain on Loose Women.

He noted he has gained three stone in weight since he no longer needs to train for 10 hours a day.

But James implored onlookers watching him prance around in his maroon pants “not to judge” him.

Ex Dancing On Ice contestant James and his two-year-old daughter seemed delighted to be strutting their stuff in the clip.

It showed James bopping along in the kitchen, demonstrating how to twirl and point a leg in time to his little one.

He captioned the upload: “After Ella’s appearance on Loose Women yesterday, many of you have been asking if we ever dance with her so I thought you’d like to see me doing a bit of dad dancing with our little princess.

“She’s got the moves right?! And yes I know – I’ve got the dad bod to go with the dad dancing.

Don’t judge me – I’ve not needed to wear tight Lycra for a while.

“Don’t judge me – I’ve not needed to wear tight Lycra for a while (thank God!).”

Many of James’ dedicated followers indicated they couldn’t care less about his appearance or condition.

And several more highlighted how they felt having a ‘dad bod’ is only to be expected for the father or a young child.

“You are allowed a dad bod when you’re a dad,” one commenter chuckled.

“Does a dad bod really matter at the end of the day? You are making precious memories with Ella,” suggested another.

And someone else added: “Many many dads wish they had a dad bod as good as yours!”