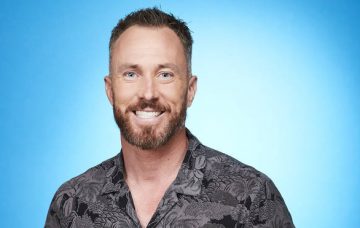 He will be on the new series of Dancing On Ice

The Dancing On Ice star – who is also a professional dancer – has opened up about heath and fitness, and insisted the individual needs to take a look at themselves to see what changes they can make in their life.

Speaking on ITV’s ‘Loose Women’, he said: “For the general person, you can’t out-train a bad diet, that’s a fact. If you’re taking in so many calories, and then thinking ‘I’ll do an hour on the treadmill’ – it’ll help, of course, I think exercise is very important.

“But there’s a lot of people out there that are obese, they are dangerously overweight. But then you do have to look at going on a diet, counting your calorie, seeing how many calories you’re taking in a day.”

The 40-year-old star – whose weight hit 15 stone before he made himself get fit again – admitted he loves to indulge in takeaway and fast foods, but said it is about “moderation” rather than simply cutting things out in a bid to get in shape.

He added: “I was eating whatever I wanted, takeaway, drinking more, enjoying life a lot more than I ever did – and not exercising as much.

Everything that isn’t good for you tastes so good.”

“I love Indian takeaways, Chinese takeaways, fast food – I like eating it. I like chocolate, I like crisps. There’s a lot people that enjoy those things, but it’s about moderation.”

Read More: Nervous Gemma Collins is “throwing up constantly” ahead of Dancing On Ice

Besides his own ballroom career, James has also had to get in good shape for the upcoming series of Dancing On Ice, and he admitted being on the other side of a celebrity-professional partnership was tough after spending even years on Strictly Come Dancing.

He previously said: “The kind of thing I used to get angry at my celebrities for on ‘Strictly’, I’m having my partner get angry at me about, so it’s really funny.

“I know the answers, I know it’s wrong what I’m doing but I can’t stop myself doing it,which is really weird being on the other side, it’s really weird in many ways.”

Are you looking forward to seeing James in Dancing On Ice? Leave us a comment on our Facebook page @EntertainmentDailyFix and let us know what you think.