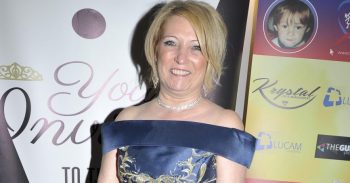 She's told people not to believe a word of it

The mother of murdered toddler James Bulger has called the new Michael Jackson documentary Leaving Neverland “crap” and told people not to believe the accusers.

Both allege the King of Pop abused them when they were kids, but Denise Fergus has taken to Twitter to slam their claims. 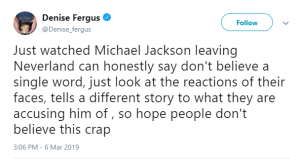 Read more: James Bulger killer says he had a better life for killing the toddler in new documentary

“Just look at the reactions of their faces, tells a different story to what they are accusing him of , so hope people don’t believe this crap.”

It follows Denise’s criticism of Detainment, the Oscar-nominated film about the murder of her two-year-old son.

Shortly after it was announced that Detainment was up for the prestigious award, she wrote on Twitter: “I cannot express how disgusted and upset I am at this so called film that has been made and now nominated for an Oscar.”

This is all I want to say at present. pic.twitter.com/GbyshtVoa9

Furious that she was not contacted beforehand, Denise was also angry that the film’s creators had a child actor reenact what happened to James.

She led calls for for the film to be boycotted, and a petition for it to be banned from cinemas attracted over 90,000 signatures.

Detainment was beaten to the Oscar by Skin, a film about neo-Nazis by Israeli filmmaker Guy Nattiv, and Denise was delighted it missed out on the honour.

Michael Jackson was followed by allegations of sexual abuse for most of his adult life.

But in 2005, judges acquitted him on child molestation charges.

Jackson, who died in 2009, always denied the allegations, and his estate has denounced Leaving Neverland.

The singer’s nephew, Taj Jackson, was among those who came to his defence.

He told Sky News: “We knew Wade very well. He was super close to us, super close to my uncle too. But we don’t feel like our voice is being [heard]. It’s been hard, in that way.

“My uncle is no longer here, so it does matter about credibility and character. Take 10 minutes on Google and look up credibility. They’ve both changed their story three or four different times.”

– Part one of Leaving Neverland aired on Channel 4 last night (March 6th) and part two is on tonight at 9pm.

What’s your take on the claims? Leave us a comment on our Facebook page @EntertainmentDailyFix and let us know what you think!