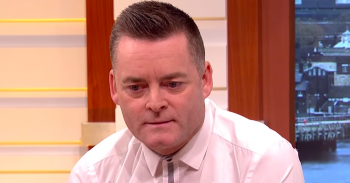 The toddler's dad and uncle brought the case

The brutal murder of toddler James Bulger is a case nobody could ever forget.

And now his dad has lost a lengthy court case against Jon Venables, allowing the killer to live out his days with a new identity.

Ralph Bulger was at the High Court, battling to have his son’s murderer identified publicly, after a worldwide court order granted Venables anonymity.

Venables and Robert Thompson were 10 years old when they were both sentenced to life in prison for the kidnap, torture and murder of the two-year-old in February 1993.

They were later released and given new names, but Venables was later convicted again for further offences in 2010 and in February 2018.

He was jailed last year for three years and four months after admitting looking for extreme child abuse images and possessing a “sickening” paedophile manual, as well as more than 1,000 indecent images.

When arrested he reportedly told police he couldn’t help his “stupid urges.”

Ralph Bulger – and his brother Jimmy – had argued in court that details about Venables are “common knowledge” and easily accessible online.

According to The Mirror, the Bulgers’ lawyer, Robin Makin argued: “This a very high-profile matter and indeed it is one where the current situation is unprecedented, in which we now have a child murderer who has, as an adult, committed two sets of serious sexual offences and is undoubtedly a danger to the public.”

He added: “The point is that [Venables] has been trained by the state to be dishonest and hide his identity, and to no doubt develop techniques for dealing with such matters.”

After Venables’ arrest last year, Ralph – whose son was killed after being kidnapped from a shopping centre in Merseyside – appeared on Good Morning Britain where he called the crime “sickening”.

He added that the current system of protecting Venables was “wrong.” Adding: “The laws have got to change.”

The shocking crime was back in the headlines again in November, when Channel 5 aired a new documentary about the case, James Bulger: New Revelations.

James’ mum, Denise shared her thoughts on Twitter after the programme aired, writing: “I’ve had to watch the disgusting documentary to know what I’m having to deal with.

“I can honestly say I am upset, fuming with the one-sided sympathy with the evil killers of my beautiful son who was only 2 years old when they abducted and murdered him.”

She hit out again at film Detainment, which received a nomination in the live action short category at the Oscars last month.

Read more: Mark Wright reveals he turned down offer to be The Bachelor

What do you think of this shocking new development? Leave us a comment on our Facebook page @EntertainmentDailyFix and let us know what you think.