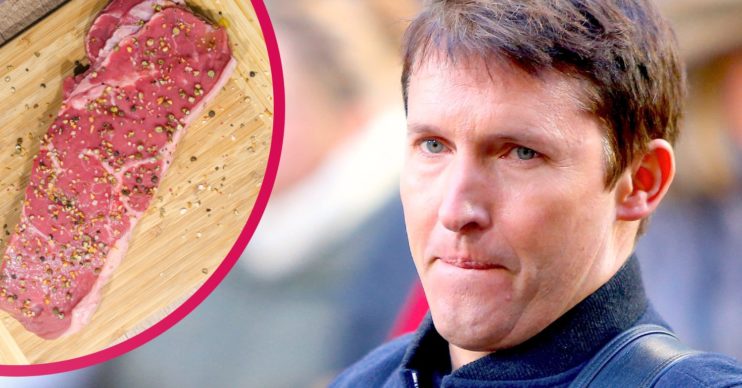 And he did it all to wind up his vegan friends!

James Blunt says he suffered from scurvy after only eating meat for two months straight.

Speaking on a podcast, he said he decided to go on the unusual diet to annoy his vegan pals.

On Table Manners with Jessie Ware and her mother, Lennie, he explained that his bout of ill health took place during his university days.

How did James Blunt get scurvy?

Back in the 1990’s James was just a humble student at the University of Bristol, where he studied aerospace engineering and sociology.

He said his sociology colleagues were predominantly vegetarian or vegan.

He told the hosts: “On the sociology side of things there were 170 girls and only three boys, of which all the girls were vegetarian or vegans.

It took me about six to eight weeks to get very unhealthy.

“So out of principle I decided I’d become a carnivore and just lived on mince, some chicken, maybe with some mayonnaise.”

But after just two months he became so unwell he visited the doctor – only to be left stunned when he was diagnosed with scurvy.

James continued: “It took me about six to eight weeks to get very unhealthy and see a doctor, who then said, ‘I think you’ve got the symptoms of scurvy’.”

What is scurvy? How do you get it?

Fortunately, he was prescribed with a simple solution – increase his vitamin C intake.

He continued: “The doctor said, ‘You are really lacking in vitamin C’ so I took it upon myself to drink orange juice every night. Then, I nearly developed acid reflux.”

Read more: Catherine Tyldesley targeted by trolls over her appearance

Scurvy is a disease just about as old as time. However, it has mainly disappeared from Western civilisation in recent decades.

A severe lack of vitamin C is the primary cause of the condition. Weakness and fatigue are early signs.

This can progress to struggling to balance and severe limb aches.

Scurvy mostly affected sailors in centuries past. Often on boats for months, their diet would soon be devoid of any foods rich in the vital vitamin.

Unfortunately, it is still present in some third world and developing nations.