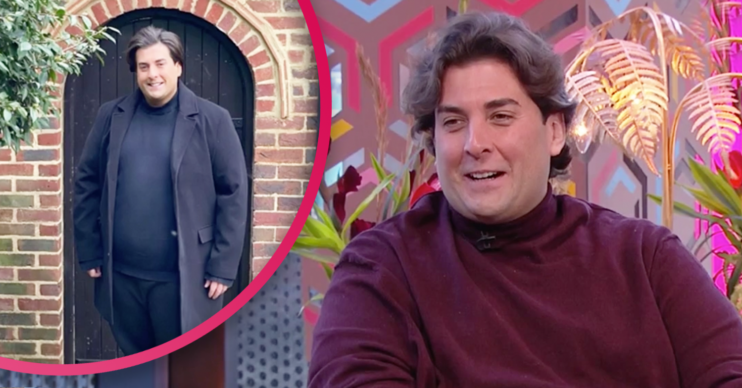 He tipped the scales at 27 stone before bariatric surgery

James Argent has given an update on his weight loss after having 70% of his stomach removed during gastric sleeve surgery.

The reality TV star tipped the scales at 27 stone before undergoing surgery in April.

And, appearing on today’s (May 25) Steph’s Packed Lunch, James said he’s already feeling “so much happier”.

James Argent weight loss: How is he doing so far?

While James admitted that he has a way to go, he said he is “pleased with the progress”.

“Four stone out of 11 or 12 might seem like a drop in the ocean but I’m pleased I’ve made progress already.”

Steph asked James how he felt at his heaviest, to which he replied: “It felt horrible.”

He added: “I was always extremely uncomfortable, I couldn’t look at myself in the mirror. It felt depressing and it just wasn’t me.

“Now I’m starting to feel like myself again and I’m excited about what the future is going to bring.”

Arg also revealed that it was “scary” being 27 stone, especially after doctors told him how “dangerous” it was.

He said: “It was scary being 27 stone… It was serious, doctors were telling me how dangerous it was…

“I knew it was something I had to address pretty quickly.”

James added: “There were times when I was at my biggest I did feel uncomfortable about leaving the house and sometimes I’d wait until it was dark before leaving the house because I’d be conscious about having pictures taken of me.”

He continued: “Now I’m in a place where I’m on this journey, I’m losing weight gradually and accepting the way I look now.”

#TOWIE‘s Arg tells Steph about undergoing gastric sleeve surgery after tipping the scales at 27 stone. He’s since lost 3 and a half stone and we wish him all the best for the future 🤗@RealJamesArgent | @StephLunch pic.twitter.com/vIf74WtWvl

In the days leading up to his surgery, James said he did have “nerve-wracking” moments.

However, he added: “It’s the best thing I’ve ever done. I’m over six weeks post-surgery and I feel great.”

I was always extremely uncomfortable, I couldn’t look at myself in the mirror. It felt depressing and it just wasn’t me.

Clearly in it for the long haul, James said the gastric sleeve has helped him with portion control.

“I can still eat what I want now, it’s down to me what I put inside my mouth,” he said.

However, he added: “It helps me with portion control. It helps me physically, I’ve still got to do a lot of work to make sure I’m all good mentally.”

Arg has a ‘good relationship’ with Gemma and Lydia

James also lifted the lid on his relationship with Gemma Collins as Steph asked if he’s on speaking terms with the GC and former girlfriend Lydia Bright.

He admitted: “I’ve got a good relationship with my ex-girlfriends, it’s nice not to be bitter. They’ve both probably got a bit too much on me!”

Looking to the future, Arg has quite the role model in mind to emulate and revealed boxer Tyson Fury is his inspiration.

“He was morbidly obese and suffered with addiction problems and he went on to become a world champion,” he said, explaining that he’d like to swim the English Channel.

“If I can use him to inspire me and get me across the English Channel after everything I’ve been through, that would be a dream come true.”