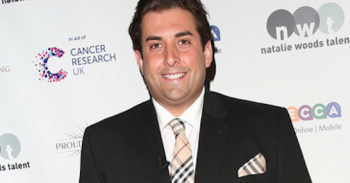 TOWIE favourite James Argent has been urged to shift some of his bulk to avoid serious health concerns.

According to the director of a hypnosis weight-loss scheme, Arg is hovering around the 18 stone mark – and his waist may have expanded to 40 inches.

And although the reality performer’s size has yo-yoed over the years, weight loss professional Steven Miller reckons the Essex TV personality should take action sooner rather than later to ensure he does not remain on ‘death row’.

Speaking to Best mag, Miller encouraged Gemma Collins’ on-off man to follow his advice because ‘he’s too good-looking’ to be so heavy.

But he also called on Dancing On Ice sensation Gem – who is reported to have suspected Arg binges on grub when she’s not around – to assist him in dropping the pounds.

Miller is reported to have told the magazine: “I want [Arg] to realise he might soon suffer a heart attack, stroke and even cancer due to his size.”

Apparently complimenting the 31-year-old, Miller continued: “Underneath that duvet of fat is a good-looking chap. I hope he starts to embrace my messages, which is that he’s actually far too gorgeous to be fat.

“I am sure Gemma isn’t a feeder, and hope she makes it her mission to help him go from the fat-walk to the catwalk.”

It is believed Arg – who came under fire some weeks ago for ’fat-shaming’ Gemma – is believed to currently be the heaviest he’s ever been.

He reportedly sent a series of cruel texts to her – including one that said she “had more rolls than Greggs” – after a huge row that led to the pair breaking up.

He told OK! magazine: “I’m ashamed of what I said to Gemma – I love her with all my heart. I have problems with my own weight so I’m the last person who should be trying to fat shame.

“It’s a bit pot, kettle, black as Gemma lost two stone doing Dancing on Ice so I actually weigh more than she does now.”

She is also said to be stung by suggestions she could possibly be at fault for any weight Arg may have put on.

An insider was quoted as telling Closer magazine: “Gemma’s been really hurt by the comments and says it’s outrageous to blame her.”

However, a report last week from the same mag claimed she fears he could be scoffing more than usual without her keeping an eye on him as she spends time in Los Angeles for work.

“Gemma’s worried Arg will be ordering takeaways every night when she’s not there to encourage him to eat more healthy meals, and he’ll be gorging on crisps and chocolate when he’s lonely in the flat,” a source is quoted as saying.

“She’s urged him to use the time to get back into his fitness routine and return to a healthy eating plan so that they can talk about working on some joint projects in LA together.”

😂😂😂😂😂 MRS DOUBTFIRE!!! What an absolute ringer! 😆 I thought it looked good in the mirror!🙈 #WhyAlwaysMe!?