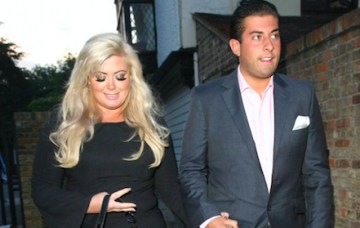 Will these two ever make a decision?

The will-they-won’t-they of Gemma Collins and James ‘Arg’ Argent’s relationship was all anyone could talk about during the last series of The Only Way Is Essex.

And now Arg has opened up about their on/off romance, saying: “I think me and Gemma is the greatest TOWIE love story, because of the ups and downs.”

Speaking ahead of the new series of the ITV reality show, the 30-year-old promised more drama from the relationship.

He said: “I’m sure it will be a rollercoaster as per usual, but the plan is for us to run smoothly and for us to see how our relationship unfolds.”

Arg added their status was TBC right now, saying: “Our current relationship is happy, close, but still up in the air. The best of friends, she’s my bestie.”

The Christmas special of the series ended with Arg finally confessing his love for Gemma, 37, but she walked away.

The pair have been back and forth with their romance for an astonishing six years, and fans are hoping this could finally be the year they make a go of things.

Arg insisted he has grown up since the last series, saying: “I’ve matured into a nice, caring young man. I’d like to think that I’m still very similar to how I was when the show started. I’m still humble, friendly and me.

“When I was younger I learnt a lot of life lessons on camera. I feel like now I still give everything to the show but the way I handle things is more mature.”

Arg is one of the only original cast members still on the show and he confirmed he’s going nowhere.

He said: “As long as the show runs, I’ll still be on it. There’s no TOWIE without Arg. I wouldn’t say I was the King of Essex, I would say I was the Ken Barlow of TOWIE! I’m the king in terms of longevity.”

It comes after the reality star spent Boxing Day with Gemma, posting a short video of her on his Instagram.

Read more: Gemma Collins gets a bizarre makeover ahead of new TOWIE series

Meanwhile, Celebs Go Dating star Gemma revealed on Loose Women earlier this month that Arg had asked her out again.

Speaking to the panel after her stint on Celebs Go Dating, the reality star confirmed: “Arg actually rang me earlier and he was like, ‘Gem, can I take you on a date tonight?'”

She asked the panellists, Anne Diamond, Denise Van Outen, Andrea McLean and Nadia Sawalha: “What shall I do?”

Gemma then admitted: “I’m going to start crying… I feel all emosh.”

Do you want Gemma and Arg to end up together? Leave us a comment on our Facebook page @EntertainmentDailyFix and let us know what you think!