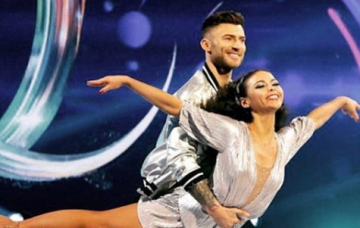 New images have been released showing the moment Jake Quickenden sustained an injury ahead of the Dancing On Ice final.

The former X Factor and I’m A Celeb star was rehearsing with professional partner Vanessa Bauer when he dislocated his thumb.

The 29-year-old can be seen on the rink clutching his hand in one of the stills, as a concerned Vanessa skates over to see what is wrong.

The singer is then moved to sit in the stands where he is given oxygen to breathe as he winces in pain.

Jake, who is favourite to win the show, was adamant he was fine to continue training but medics insisted he go to hospital to be checked out following the incident on Tuesday.

In an Instagram live video, he later told his fans he was relieved to be told everything was fine after he’d had an X-ray and MRI scan.

“I don’t have to have an operation and I can go back to training – which I was going to do anyway – but pretty buzzing,” he said.

Further pictures released by ITV show him nervously waiting the results of his scans, before looking relieved with a support on his hand.

In an appearance on Wednesday’s Lorraine, Jake played down the injury and said it was all “a lot of fuss over nothing” but he had to go to hospital as “a precaution.”

He said: “When I was getting the X-rays and MRI scans yesterday I was thinking, ‘It’s just a thumb!’ but it’s more a precaution. I don’t want to lift Vanessa and have something happen.”

Jake is determined not to let the injury affect his performance on Sunday in the final, where he will compete against rugby player Max Evans and Coronation Street actress Brooke Vincent for the title.

The trio made the final last weekend when Love Island’s Kem Cetinay was eliminated to the shock of many viewers.

In Sunday’s final, all three couples will perform before one is eliminated.

Then the final two will take to the ice again to dance to Torvill and Dean’s iconic Bolero routine, which won them the gold at the 1984 Winter Olympics.

With the Olympic skaters looking on as judges, the contestants will have to pull out all the stops to nail the moves.

Dancing On Ice’s live final is on Sunday at 6pm on ITV.

Who do you want to win Dancing On Ice 2018? Leave us a comment on our Facebook page @EntertainmentDailyFix and let us know what you think!