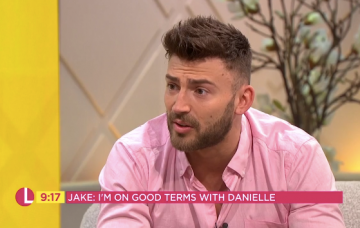 The Dancing On Ice winner addressed speculation about his relationship for the first time during an interview on ITV’s Lorraine on Wednesday.

Jake, 29, said nothing bad had happened between him and Danielle, they were just taking some time to themselves and seeing what happened.

He explained: “We’re having a bit of time apart, kind of dealing with ourselves, and work, and being busy.”

Referring to his close friendship with Danielle’s dad Carl Fogarty, whom he met while appearing in I’m A Celebrity, Jake added: “I’ve got so much respect for Dan and her family and everything they’ve done.”

He continued: “For me it’s just about taking some time out and seeing what happens really. But like I said, there’s not a bad word. I was with her on Monday, we still talk and I still love her to bits, but sometimes you’ve got to go away to come back.”

Rumours emerged last month that Jake and Danielle had called off their wedding after his busy work commitments allegedly put a strain on their romance.

It came as a surprise to fans, as just days before Danielle had shared a gushing and supportive message about Jake’s success on the Dancing On Ice tour.

She told him: “Enjoy your last day @JakeQuickenden on this insane, amazing journey you have had@dancingonice @DOI_Tour something is telling me though this isn’t the last of your skating career see you later.”

Jake proposed to Danielle back in September, and had often praised her in interviews and spoken of his excitement at marrying her.

Announcing their engagement to Hello magazine, he had said: “From the moment we met, I knew I’d propose one day.”

Back in March, Jake had told The Mirror wedding planning was going well, and praised Danielle for how much she was doing while he was working on Dancing On Ice.

“I’ve had the wedding planning going on for a bit now and Danielle’s amazing. She’s literally taken a lot on board and I really appreciate that because she’s so supportive of what I’m doing as well,” he said.

Jake later admitted to Mail Online that meant Danielle was making all the decisions and he wasn’t entirely sure what was going on.

“I haven’t got a clue to be honest. We’ll just roll with it and see how it goes. Until I’ve got a day off she’s making all the arrangements, so it’s a bit of a surprise party for me,” he said.

Jake had said the wedding date would likely be at the end of the year, and Danielle had already got her wedding dress picked out.

“It’s all looking pretty good. It’s running smoothly. It’s all thanks to her and her mum and my mum,” he added.

Danielle has yet to address the couple’s relationship; she’s just back from a sun-soaked holiday abroad in Dubai, from which she shared a string of envy-inducing photos.