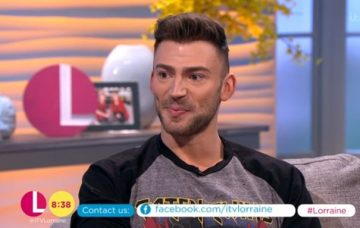 Jake Quickenden shocks Lorraine by revealing what’s in his bed

What's lurking under the sheets?

Lorraine Kelly was left blushing on Wednesday when Jake Quickenden whipped off his bed sheets to reveal what was next to him in bed!

The morning TV host was interviewing Jake via video link from his hotel bed, as he’s currently on the road with the Dancing On Ice tour.

Lorraine couldn’t help noticing a large lump in the bed next to Jake, and quizzed whether there was somebody else hiding under the sheets.

“Is there somebody else in there with you?” asked Lorraine. “It looks like there is someone else hiding under the covers. There is not, is there?”

Well, er, she was kind of right!

Jake, 29, whipped off the bed sheets to reveal there was someone – or should we say something! – next to him in bed: Lorraine herself!

The cheeky Dancing On Ice champion had a cardboard cut-out of Lorraine in bed, which sent the 58-year-old into fits of giggles.

“You know what?” explained Jake. “I love coming into see you so much, I have taken you on tour with me, Lorraine!”

She replied: “Oh no! Where did you get that, you crazy person?”

Jake added that fiancée Danielle Fogarty is “fine with it”, joking: “I can’t fight it anymore!”

Jake is on the Dancing On Ice tour until mid-April, and described it as an “incredible” experience after he won the rebooted series earlier this month.

“I can’t believe I’m on tour doing arenas ice-skating! I can’t get my head around it, it’s mental.”

As well as skating, the former I’m A Celebrity and X Factor star is also singing.

“For Chris (Dean) and Jayne (Torvill) to ask me to do that on tour is unbelievable. It’s a massive privilege to go out there and sing with Vanessa (Bauer) skating around me.”

He added: “Everybody on the tour is so professional. The pro dancers are incredible. We are having such a good time.”

Have you seen the Dancing On Ice live tour yet? Leave us a comment on our Facebook page @EntertainmentDailyFix and let us know what you think!