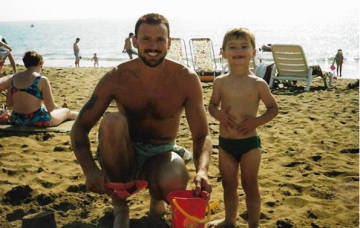 Now we know where he got his looks!

Jake Quickenden has shared a picture of himself as a child with his late father, Paul, and it proves the apple certainly didn’t fall far from the tree.

The 29-year-old Dancing On Ice star has grown up to look just like his father, who sadly died of bone cancer in 2008.

Jake shared the image with his 572k followers on Instagram showing him as a little boy making sand castles with his dad at the beach.

He wrote alongside the picture: “How good looking was my old man… and how ugly was I … miss you pops.”

The photo quickly gained more than 20,000 likes and nearly 500 comments as Jake’s fans couldn’t get over the family resemblance.

A third agreed writing: “You are his double now! 2 peas in a pod,” while a fourth said The X Factor star was: “a chip off the old block.”

Another wrote: “Wow!!!!! You are the spitting image of him Jake!”

Read more: Emotional Paul Gascoigne struggles to hold back tears as he discusses father’s death for the first time

Others commented on how good-looking Paul was, and said he would be so proud of how Jake is doing in his TV career.

Jake’s fiancé Danielle Fogarty also commented on the sweet image, writing: “Oh my god how have I never seen this before!” with three heart emojis.

The pair are set to marry later this year, after meeting when Jake appeared on I’m A Celebrity with her dad, Carl Fogarty, the motorbike champ.

Jake previously told The Mirror he’ll be sad his dad, and his older brother Adam, won’t be at the wedding.

He also lost his sibling to cancer not long after their dad’s death.

He said: “They would love Danielle. But I’m a firm believer they are with me every day. We have two massive pictures of my dad and brother, and they’ll be there at the wedding. And we will do special drinks that they liked.”

Jake later shared another throwback snap on his Instagram stories of his dad with him and his brother in a paddling pool.

He wrote: “All the amazing comments on my dad… here’s me, my big bro and old man.”

Jake is currently preparing for Sunday’s Dancing On Ice semi-final.

He’s the favourite to win the show with professional partner Vanessa Bauer after impressing the judges and viewers with his daring routines.

What do you think of Jake’s throwback snaps? Leave us a comment on our Facebook page @EntertainmentDailyFix and let us know!