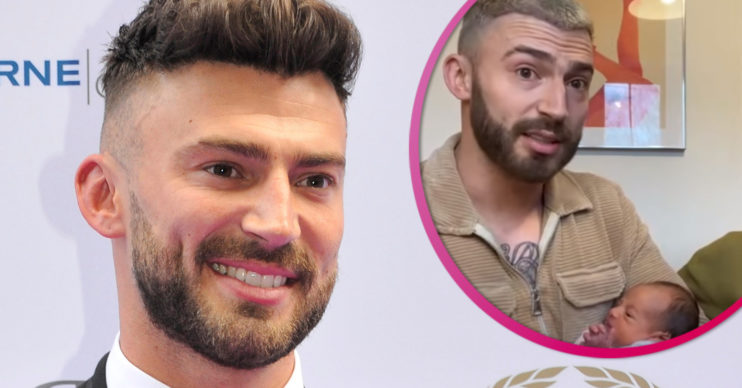 The new dad, who welcomed Leo in February with his girlfriend Sophie Church, shared an emotional message on Instagram alongside a snap of his adorable tot.

Jake said trolls even told his “little man” that he “needs Botox”.

What did Jake Quickenden say about son Leo?

Jake wrote: “REAL POST… So in the past week this little man has been told he needs Botox, that he’s ugly as [bleep] and that he’s weird looking.

“To troll an innocent child is so wrong”

Jake continued: “I don’t mind people giving me [bleep], as sad as it is I’ve had to get used to being called ‘irrelevant’ ‘ugly’ ‘attention seeking’ and the list goes on.

“But to troll an innocent child is so wrong and the people doing it seriously need to seek help.

“Also why should I stay off social media if I don’t want him trolled the thought process of some people is shocking, maybe people just shouldn’t troll.”

He added: “I enjoy social media it’s full of lovely people who are supportive and I like sharing my ups and downs, I try and be real as possible.

“But unfortunately there is a dark side of social media and something needs doing about it.

“Anyway rant over!! The lion is 4 weeks today! Cute af. Love you son.”

Many of Jake’s celebrity pals supported him in the comment section.

Jordan Banjo wrote: “My bro, that’s one thing none of us can understand, we can be as polite as we want but sometimes people get comfortable because there’s a screen there.

“One day they’ll do it to the wrong person, what goes around comes around.”

Read more: Jake Quickenden baby: New dad has ‘struggled’ to bond with son as he admits to arguments with partner

Meanwhile, Scarlett Moffatt commented: “You’ve got to be [expletive] up in the head to troll a baby.

“He is beautiful and has a wonderful family. Sending lots of love.”

Meanwhile, Jake recently revealed he struggled to bond with Leo.

Speaking to The Sun, the singer revealed things are “up and down”.

He said: “I struggled with the bonding the first few weeks. I felt like every time I was trying to settle him he wouldn’t settle and then I would hand him to Sophs and he would fall straight asleep.