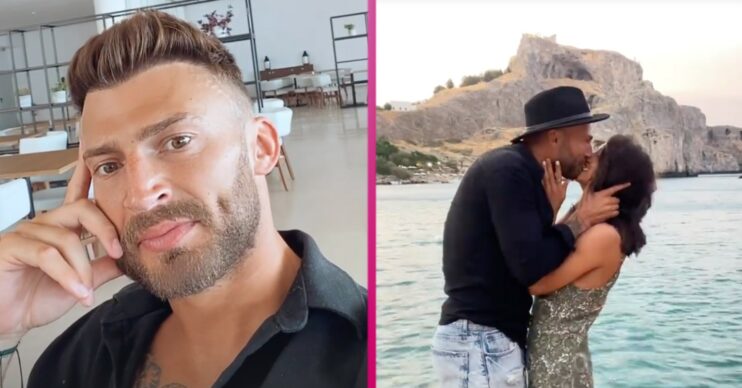 He got down on one knee during their holiday in Rhodes

Reality star Jake Quickenden is engaged to Sophie Church after he got down on one knee during their Greek holiday.

Overjoyed Jake, who shares son Leo with Sophie, told Instagram followers on a snap of the newly-engaged couple smooching: “She said yes!”

Jake had recently indicated that marriage has been on his mind in an exclusive chat with Entertainment Daily.

What did Jake Quickenden say about Sophie as he announced they are engaged?

Jake captioned the loved-up shot: “The love of my life, the mother to my beautiful Leo and Freddie, I love you so much.”

He added, excitedly: “This isn’t a drill – it’s actually happening.”

Posting pics to her own account, Sophie described Jake as “the love of her life”.

She wrote: “I said YES to the love of my life and my future husband. I couldn’t have asked for a better stepdad for Freddie and father for baby Leo.

“Thank you for making this holiday so special! I love you forever.”

How did Jake propose?

Jake also shared with fans the moment that he asked Sophie to marry him.

Posting a series of video clips on his Instagram Stories, Jake was seen whispering to Sophie on a jetty in Rhodes with a glorious sea view behind them.

As the sun set, Jake eventually got down on one knee and produced a ring. Without hesitation Sophie accepted and the couple embraced.

Jake also lifted Sophie up so her legs were around his waist – and he jokingly asked whether anyone could see her pants!

Sophie later showed off the ring she was presented with in other clips uploaded by Jake.

Jake also joked that the gem was “cubic zirconia” as they marked their engagement with friends.

This morning (August 8), Jake updated fans with another shot of the couple’s special moment.

He reflected: “Last night was a dream!

Love you Sophie. Thanks for always pushing me, allowing me to be myself and keeping me together when I could fall apart.

“I would like to say thanks for all the lovely messages from everyone. It’s lovely to read them all, it was a perfect way to end the holiday. Be happy.”

Jake continued: “Love you Sophie. Thanks for always pushing me, allowing me to be myself and keeping me together when I could fall apart. You are the glue.”

The comments sections of the couple’s posts were quickly inundated with congratulations from famous friends.

Among those to offer their best was Alexandra Burke. She wrote: “Screaming with joy for you both. You both deserve all the happiness in the world.”

James Jordan contributed: “Congratulations to you both mate.”