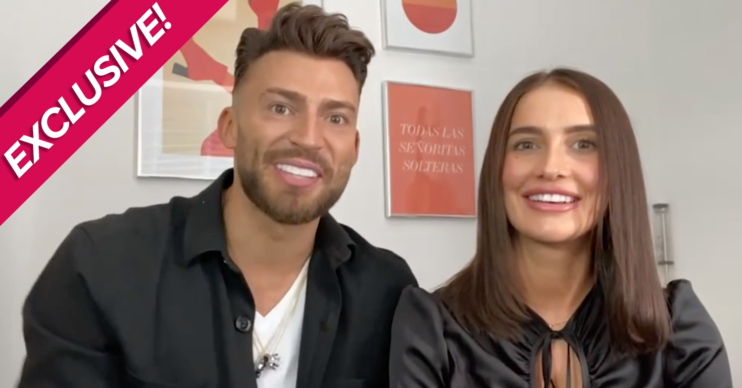 Jake Quickenden and girlfriend Sophie Church are set to get engaged “very soon”, the pop hunk has exclusively revealed to Entertainment Daily.

The new parents welcomed son Leo into the world 11 weeks ago, and the tot is settling in well at home with big brother Fred, six, from Sophie’s previous relationship.

And now it seems Jake is intent on making an honest woman out of Sophie.

He told ED!: “Usually people are married then they have kids but we’ve done it the other way round.”

What did Jake Quickenden say about girlfriend Sophie?

Jake admitted he’s in total awe of Sophie and her mothering skills.

“She works so hard bless her, she’s back at work,” he admitted.

“She’s a PA for a financial advisor so she’s gone back to work. She’s doing three days a week and juggling him, she’s definitely a diamond.”

And, it seems, that’s just what might be landing on her finger very soon.

“We’re not engaged yet. I’ll just leave it at that. Very soon. Very soon. I’ll get down on one knee very soon.

“Obviously it’s on the cards,” he said.

However, wedding bells won’t be ringing just yet as Jake admitted he’s waiting for the pandemic to be fully over before walking down the aisle.

“I kind of want to have a big wedding though so I might wait for everything to clear up first,” he said.

The couple had a brief split at the start of Sophie’s pregnancy with Leo, but it appears they’re stronger than ever now.

“We do the whole baby thing together,” Jake admitted.

“We just try and support each other as much as possible. I think we’ve got a really strong relationship in that way.

“When we had Leo I wanted to be hands-on and I’ve got this opportunity where I’m not working as much and I can be at home. It’s been really nice because I’ve got to know Leo really well.

“I learnt a lot about myself as well. I’m much more patient than I thought I was.

“I feel like it’s been a bit of a blessing in disguise. As well as being really hard this last year I’ve got an amazing little baby out of it.”

Jake also admitted that parenthood is “much harder” than he “ever expected”.

He said: “It’s much harder than I ever expected to be honest and I just take my hat off to every parent out there.

“You come up against so many different hurdles – I’m more worried than I ever though I could be. I’m worried about everything.

“You have to expect that and expect that you’re going to be worrying till he’s 18 and then you’ll probably still worry. But it’s amazing.

“I wouldn’t change anything for the world – even the one-hour sleep at night. I’m staring at this perfect little thing that me and Sophie have made and I’m loving it,” he said.

“Soph couldn’t be any better,” he added.

Read more: Jake Quickenden pays touching tribute to late brother who died at the age of 19

“I knew how good she’d be because she’s got Fred and how he’s turned out as a person. But she impresses me every day with how she deals with things.”

“He’s 11 weeks now and in a few more weeks he’ll be giggling away. Every day he does something different and I’m just like, aww.

Jake’s come up against his fair share of trolls during his time in the public eye, but when they started to target little Leo recently he said he just couldn’t get his “head around it”.

“I’m my own worst enemy because I argue back,” he admitted.

“I sat down with Soph the other day and she was like: ‘You’ve got to ignore it.’

“They’ve got to be going through some [bleep] if they’re willing to do that to a newborn baby. So I’m trying to focus on the positives and the lovely people.”

One such positive is his team up with Thortful and Public Health England.

“I just think we’re so controlled by negative comments and how quickly they can change our mindset.

“Comments online or when someone someone says something sarcastic online it can really affect your whole day.

“Someone told me about this campaign with Thortful partnering with Public Health England and a small act of kindness can just really help somebody and change their day.

“So Thortful is giving away 10,000 free cards and you can send them out to someone. Reciving a card or a smile in the street or a WhatsApp message asking your mates actually how are you can make someone’s day. I just think it’s so important.

“You can go online and fill out the Mind Plan on the Public Health page. It’s five questions that evaluate how you’re feeling then gives you useful things to do to make yourself feel better. And when you do that you get the code and you get the free card.

“For me, if I was to randomly send a card to my mum, it would cheer her whole week up.

“We do focus on the negative a lot but we can be more positive and say nice things and change somebody’s day simply by sending a message.”

‘My dad would’ve been an amazing grandad’

On the subject of his parents, ED! asks if it’s bittersweet that Jake can’t share his new role as a father with his own dad Paul or his younger brother Oliver.

“That’s always at the back of my mind,” Jake admitted.

I wouldn’t change anything for the world – even the one-hour sleep at night. I’m staring at this perfect little thing that me and Sophie have made and I’m loving it.

“It is bittersweet but I do believe that they’re somewhere they can see and that they are proud of him and proud of me.

Jake is intent on keeping their memory alive – especially for Leo, whose middle name is Oliver.

“I’m always talking about them. It’s important to keep the memory alive and talk about them as much as possible.

“When he grows up Leo will watch shows that I’ve done where I talk about my dad and Oliver.

“They’re always a part of me so they’ll be a part of him and I’ll let him know how amazing they would have been.”

When it comes to the future for his son, Jake has a pretty stereotypical idea of what he’d like Leo to become.

“Well, whatever he wants to be, I will support but I kind of want him to be a footballer. I think that’s every dad’s dream,” he admitted.

“If he likes sport that will be a blessing. If he doesn’t then he’ll be good at something and I’ll support him in whatever he wants to do.

“I’ll be there, just like my dad was. The amount of classes I went to when I was little – I did everything from ballet to boxing to find out what I wanted to do.

“And it turns out being a prat on reality TV was what I as perfect for,” he laughed.

So what’s next for Jake work-wise?

Contrary to reports, Jake isn’t going away to sing on a cruise ship for six months.

Instead he told ED! that he has a six-month contract but he’ll be back home to Sophie, Leo and Fred every couple of weeks.

“I am a bit anxious about going back to work actually. I’ll be away for a couple of weeks at a time and that’s giving me a little bit of anxiety.

“I think a lot of people are getting to the end of lockdown and are getting worried about normal life.

“I wouldn’t be going away for six months even if I didn’t have a baby,” he said.

So, when Sophie read the reports that he’d be away for six months, how did she feel about potentially being left to hold the baby for half a year?

“She read it and was like: ‘What, you’re going away for six months?!’

“She takes it with a pinch of salt now,” Jake concluded.

Jake has teamed up with Thortful, the greetings card marketplace, who is donating 10,000 free cards to support Public Health England’s Every Mind Matters Campaign. For more, visit the website here.

Visit our Facebook page @EntertainmentDailyFix and tell us what you think of our story.