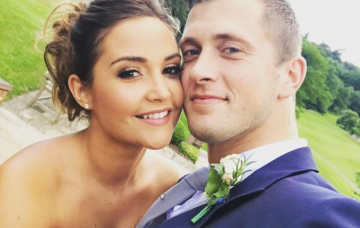 Dan Osborne has expressed his love for his two children in a spectacular way by getting more huge tattoos of them on the back of his legs.

The former TOWIE star has a son, Teddy, four, with his ex Megan Tomlin, and daughter, Ella, nearly three, with his wife Jacqueline Jossa.

He’s now had remarkably lifelike portraits of the tots permanently etched on his calves.

They join an earlier tattoo showing Teddy and Ella at his wedding to Jacqueline, which he unveiled in January.

Sharing images of the body art with his 880k Instagram followers, he wrote: “Had a great time in Edinburgh Thursday and Friday with my friend, the extremely talented @davidcorden, did these two portraits of my incredible children on my leg.”

He added: “The rose underneath Teddy was done by my boy @tattoo_mart at @inkparadisestudio. Got another rose to go underneath Ella and some background shading etc then this will be complete.”

Earlier, the 26-year-old reality star – who already has a number of tattoos on his arms and torso – had given his fans a glimpse of himself in the tattoo parlour as the painstaking work was done.

His followers said they were “excited to see” the results and were amazed by the images he shared of the almost complete body art this week.

“Absolutely stunning tattoo of ur lovely children,” another wrote.

A third joked: “Fab tatts. Don’t have 6 kids you will have no room lol.”

Others pointed out that Dan would need to save room elsewhere on his body for a similar tattoo now he’s set to become a father for the third time.

He and Jac were delighted to reveal last month that she’s expecting again, which had come as a “huge shock” to them both.

“We hadn’t been trying so it was a huge shock,” Dan told OK! magazine.

He added: “I think I’m still getting my head around it. Kids are a blessing but having three children is going to be a big responsibility. I’m not going to lie, I feel quite scared!”

Jacqueline’s pregnancy news comes as she prepares to leave her role as Lauren Branning on EastEnders.

Her on-screen sister Abi was recently killed off after the pair fell from the roof of The Vic in dramatic scenes on Christmas Day. Lauren is expected to have a happier ending leaving Albert Square to start a new life in Scotland with boyfriend Josh.

What do you think of Dan’s new tattoos? Leave us a comment on our Facebook page @EntertainmentDailyFix and let us know what you think!