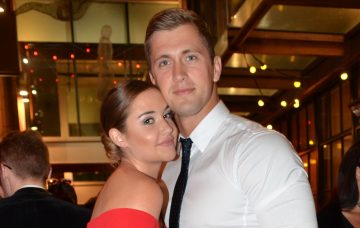 She has been married to Dan Osborne since 2017

Jacqueline Jossa has broken her silence on claims her marriage is going through a “rocky” patch.

The former EastEnders actress said it was unfair to her and husband Dan Osborne to be targeted with “nasty comments” about their relationship.

Although she did not clarify what exactly is happening, she did tell fans that she and Dan will deal with things “privately” and would appreciate some space.

Jacqueline, 25, tweeted: “No one needs to comment and get involved in things they don’t know anything about.

“Daniel and I are dealing with things privately as a team, there is always 2 sides to every story. Stop with the nasty comments, no one deserves them. Trust me. Privacy please x.”

Former TOWIE star Dan, 26, has yet to directly address the split, although he did hit back on Instagram after an allegation he’d been seen getting ‘cosy’ with another woman.

He fired back: “I am speaking and laughing with a friend. But of course a man and a woman can’t be friends in this day and age, can they?”

Jacqueline and Dan married in 2017.

They share daughter Ella, three, and have another child on the way this summer. Dan is also dad to son Teddy, four, from a previous relationship.

Rumours about their marriage surfaced overnight, with a source telling The Sun the couple are going through a rocky patch but both “still want things to work out” between them.

The allegations came as a surprise to fans, as just last week Jacqueline told Closer magazine that she and Dan are stronger than ever.

Jacqueline added that she and Dan are focused on their children, calling Dan an “incredible” father.

ED! has contacted Jacqueline and Dan’s reps for comments.

Meanwhile, there has been some good news for Jacqueline this week, as she’s been nominated at the British Soap Awards.

She’s up for the Scene of the Year prize for her EastEnders character Lauren Branning’s fall from the Queen Vic rooftop alongside sister Abi.

Yesterday, she urged fans: “Guys, let’s talk about something positive. Can you all vote for me, please? BBC EastEnders and everything about EastEnders, but mainly me, thanks!”