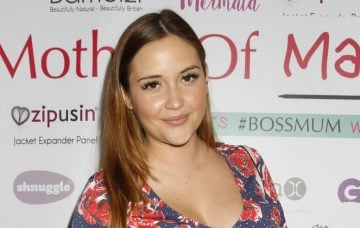 Congratulations to Jacqueline and Dan!

The former EastEnders actress, who is days away from her due date, found out the sex a few weeks back at a private scan and kept it quiet.

But now she’s shared her excitement with OK! Magazine as she prepares to welcome a sister for her daughter, Ella, three.

The little girl will be Jacqueline’s second child with her husband, Dan Osborne.

The baby’s arrival comes amid allegations Jacqueline and Dan have been going through a difficult time.

Former TOWIE star Dan, who also has a son Teddy, four, from a previous relationship, was said to have moved out of their family home following a “series of rows”.

But Dan recently shared a video of him tucking Ella into bed at night which prompted speculation he had moved back in with Jacqueline.

However, in the chat with OK!, Jacqueline, 25, said Dan, 26, had not returned to the family home but was over lots “helping out with Ella”.

She said: “We’ve been through a rough period but right now we’re getting on well. Neither of us knows what’s going on at the moment but we’re spending time together and seeing how things go.

“Dan hasn’t moved back in, but we’re seeing what happens.”

She added that he will be “hands on” when the new baby arrives.

Jacqueline and Dan tied the knot at a lavish ceremony in Cheshire in May 2017.

But as they approached their first wedding anniversary, it was alleged they had split, with Dan moving out to stay at a friend’s house.

At the time, the pair called for privacy as they tried to sort out their problems, asking their fans not to speculate over why they have hit a difficult patch.

Dan tweeted: “Whenever a relationship goes through tough times etc.. why is it always the man that gets stick..? When in ‘public eye’, worst part is, the people trying to give me stick etc are people that DO NOT KNOW ME, do not know the situation.”

Jacqueline similarly tweeted to say: “No one needs to comment and get involved in things they don’t know anything about. Daniel and I are dealing with things privately as a team, there is always 2 sides to every story. Stop with the nasty comments, no one deserves them. Trust me privacy please.”

The couple are now hoping to put their problems behind them as they focus on their forthcoming new arrival.

Jacqueline has said she can’t wait to be a mum again, while Ella is super excited to have another sibling.

Former soap star Jacqueline has admitted the only problem with Ella being so excited is it’s difficult to make her understand they don’t know exactly when her sister will be here.

“I do think it’s funny how kids just don’t understand it. Every morning she says to me, ‘Mummy, is the baby coming out today?'” Jacqueline recently told her Instagram followers.

“I try to explain to her, ‘we don’t know when the baby is coming but it is very soon.’ She’s just too excited which is lovely. It would be worse if she was dreading it.”