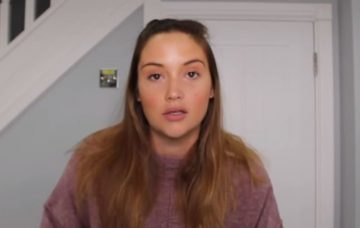 She is already mum to three-year-old Ella

Jacqueline Jossa has said she’s stunned how different it is being pregnant a second time.

In her latest vlog for her Jacqueline’s World YouTube channel, the former EastEnders actress said she even forgets she’s pregnant at times because there’s less fuss this time around.

The 25-year-old said as well as having fewer midwife appointments, she reckons even friends aren’t as excited.

She said: “I feel like last time, I was constantly having midwife appointments, constantly being told what is right and wrong, constantly told to do certain things, and to count the kicks and things like that.

“This time around, no one has been telling me that.

“It’s like no one really cares this time around so I’m kind of like forgetting I’m even pregnant.

“I don’t know whether it’s anyone else out there, when it happens a second time, it’s sort of like ‘been there, done that’ a little bit.

“The midwife appointments get shorter and there are less of them. I haven’t had one for weeks and weeks now and I won’t have one for another three weeks and it just seems crazy.

“I want to know if everything is going okay and I like to have reassurance.”

The soap star – who left EastEnders this year – went on to say: “It is just blowing my mind a bit how everything is so different. Even your friends and stuff, when you’ve done it once, it’s kind of like it’s done now.

“I’m just forgetting it’s even happening, to be honest!

“I don’t know if that’s just my way of dealing with it! But I’m chasing after at toddler, too.”

Jacqueline and her former TOWIE star husband Dan Osborne are already parents to daughter Ella, three, and Dan has a son Teddy, four, from a previous relationship.

They announced their second pregnancy in January and have confirmed they know the sex of the baby, although they aren’t telling anyone!

The couple told OK! magazine it had been a “huge shock” to discover they’re expecting.

Dan said: “We hadn’t been trying so it was a huge shock. I think I’m still getting my head around it. Kids are a blessing but having three children is going to be a big responsibility. I’m not going to lie, I feel quite scared!”

Do you agree with Jacqueline’s comments about a second pregnancy? Leave us a comment on our Facebook page @EntertainmentDailyFix and let us know what you think!