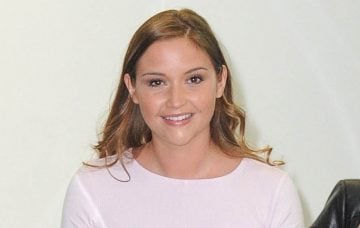 Former EastEnders star is going through a tough time

Jacqueline Jossa has posed for a set of touching pictures with her midwife after admitting that she is finding things tough second time around.

Former EastEnders star Jacqueline is 32 weeks pregnant and has thanked her midwife, Jaynie Hollister, for seeing her through the difficult days.

Wearing a tight vest top and blue jeans, Jacqueline – who is already mum to three-year-old Ella – can be seen cuddling into Jaynie while sitting on a plush sofa.

Admitting her woes with Baby No 2, the 25-year-old said: “I had such a positive experience with my midwives the first time round and I really can’t thank them enough.

“It’s been a much more difficult pregnancy this time and I don’t think I could have got through those early days without the help and guidance of my midwife.”

Jacqueline teamed up with Jaynie for the launch of a new campaign run by Pampers, which kicks off today – International Day Of The Midwife.

The actress is urging people to thank their midwife by using the hashtag #ThankYouMidwife on social media.

For every thank you shared, Pampers will donate £1 to the Royal College of Midwives Benevolent Fund, which will be used to help midwives in times of need.

Meanwhile, Jacqueline appeared on ITV’s Loose Women just yesterday to talk about her pregnancy and the campaign.

However, the star was also questioned about recent rumours that her marriage to former TOWIE star Dan Osborne is on the rocks.

It has been reported that the couple are currently living apart, but Jacqueline simply told the panel: “I’m good, I honestly am fine.

“I think with stuff goes on at home, it’s not normal to be everywhere and it’s not necessarily true, all the reasons why you’re not getting on at the moment, so that’s all I really want to say.”

Dan has since spoken out on Instagram and unleashed his annoyance at the ongoing speculation into his marriage.

He told his followers that he is focusing on his children, Ella, three, and Teddy, four.

Did you find pregnancy tougher the second time around? Leave us a comment on our Facebook page @EntertainmentDailyFix and let us know what you think!