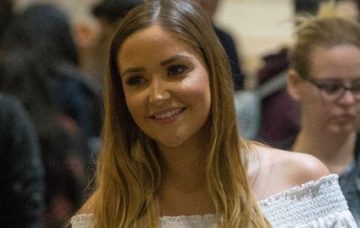 Baby number two is on the way!

At 23 weeks, former EastEnders actress Jacqueline Jossa is over half way through her second pregnancy.

And celebrating the milestone with a family trip to Dubai with her daughter Ella, her parents and a friend, Jacqueline hit the beach and couldn’t help but show off her blossoming bump.

They already share three-year-old Ella and Dan has a four-year-old son, Teddy, from a previous relationship.

Describing how her bump has ‘just popped’ during her recent vlog post for Jacqueline’s World, her new YouTube channel, Jacqueline affectionately rubs her tummy while wearing a bikini under a kaftan at the beach.

Jacqueline, 25, was also on hand to share her travelling tips with other mums, naming her essentials as “a sticker book, play dough and a tablet” to keep the little ones entertained.

“A buggy is an absolute essential for all of the walking and naps,” she added.

Luckily for Jacqueline, she confessed Ella had actually slept through most of their night flight on the way – giving the mum-to-be some much needed rest!

We are also offered a rare glimpse into little Ella’s personality and she is A-dorable.

From playing with a phone on the plane, to ‘”dancing like the water” and building sandcastles, it’s clear why Jacqueline is so smitten with her little one.

Although Jacqueline admitted to fans on her YouTube channel that she and Dan already know the sex of their baby, they have kept it a secret.

Yet she admits her second pregnancy was a complete surprise.

While singing the praises of Ella’s new buggy, Jacqueline tells her fans, “I gave her other buggy to my friend. I didn’t think I was going to have another baby, then… boom!”

Debuting her baby bump in public for the first time at the NTAS in January, Jacqueline, who left EastEnders last month, has since been very honest about her concerns around her second pregnancy.

She told OK! magazine: “(When we went for our three-month-scan) the first thing I thought was, ‘It doesn’t look like Ella,’ which made me feel sad.”

The mum-of-one added: “I know it’s ridiculous because you can’t really tell what they look like from a three-month scan, but it made me feel quite emotional because Ella looks so much like me, and I’m worried this baby won’t.”

“I’ve been thinking a lot about how I can possibly love this child as much as Ella.”

Read more: Brave One Born Every Minute midwife opens up about cancer diagnosis when pregnant with first child

We think you’re doing a fab job Jacqueline, and your second baby is lucky to have you, too.

Have you been following Jacqueline’s pregnancy? Is she your #mumgoals? Leave us a comment on our Facebook page @EntertainmentFixDaily and let us know what you think!