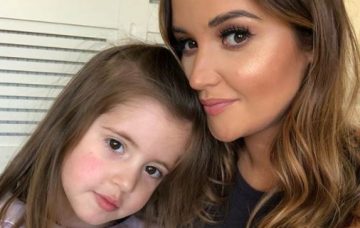 Could the three-year-old follow in her mum's famous footsteps?

Pregnant Jacqueline Jossa has revealed how her adorable daughter Ella is following in her mum’s footsteps, as she attends her first dancing and acting lessons.

Sharing an Instagram Story of her taking Ella to the class, Jacqueline told her fans, “I’m just here dropping off Ella to her first day of dancing and acting classes at Jigsaw.

“This is where I used to go when I was little.”

Wearing a stylish PINK hooded-top, a laughing Jacqueline added, “I think I’m more excited than she is!”

Jigsaw is a chain of Performing Arts Schools, specialising in drama, singing and dance for children from three to 18 years.

Her first class marks a big milestone for Ella, as she celebrated her third birthday in February.

Earlier that morning, Ella was already showing off her creative streak, building a tower of Lego bricks at home.

And with a hint of frustration at not being able to slot her final brick in, we’d say she’s definitely inherited her mum’s sassy on-screen personality!

Jacqueline, 25 has been acting since childhood, landing her first big role as Lauren Branning in EastEnders, at the age of 17, and leaving the soap in February this year.

She has been posting several cute updates about her and daughter Ella to social media recently, choosing to ignore the ongoing speculation about her marriage.

It’s been alleged she and husband Dan Osborne are going through a rocky patch ahead of the birth of their second child within the next few weeks.

The couple are said to have been living apart for the past two weeks, after Dan was spotted moving some of his belongings into a friend’s house.

There have been allegations that the amount of time Dan has been spending away from home caused rows, although he vehemently denied this.

Dan also denied using Love Island star Gabby Allen as a shoulder to cry on, while the two filmed a fitness boot camp show in Marbella, tweeting that he was just “speaking and laughing with a friend.”

Jacqueline, meanwhile, told ITV’s Loose Women of the speculation: “I’m good, honestly I am fine. I think when stuff goes on at home it’s not normal to be everywhere, and also it’s not necessarily true or the reasons why you’re not getting on at the moment.”

The pair were spotted enjoying an ice cream and having a talk in a park over the Bank Holiday weekend.

Jacqueline has also confirmed that Dan will definitely be at the birth of their second child.

Fans have been speculating that the actress may be having her second girl, after Jacqueline accidentally said ‘she’ in an Instagram video which she later deleted.

Do you think Ella will be an actress like her mum? And is Jacqueline expecting another girl? Leave us a comment on our Facebook page @EntertainmentDailyFix and let us know what you think!