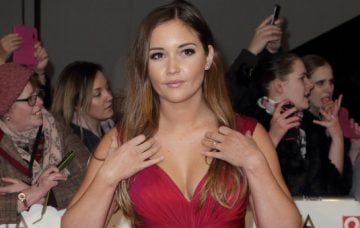 The actress – who is due to give birth within the next few weeks – quit her role as Lauren Branning last year, with her final scenes airing in February.

In a new interview with The Belfast Telegraph’s Weekend supplement, the soap star admitted she had big plans for work after EastEnders, but pregnancy has taken things in a different direction.

She explained: “This baby wasn’t planned, so it was a shock when I found out [I was pregnant] just as I left the show. Instead of following my big plan of leaving and smashing it work-wise, I’m on a break instead.”

However, the 25-year-old insisted everything has worked out for the best, as being at home has allowed her to spend more time with three-year-old daughter Ella.

She said: “I’ve really been able to embrace this time with Ella and prepare her for having a new member of the family.”

Jacqueline hasn’t been completely stepping away from work, however, as she recently launched her own YouTube channel, where she shares videos updating fans on her pregnancy.

And when she’s ready to return to the screen, she already knows what sort of roles she’ll be looking for.

She told Closer magazine recently: “I was at EastEnders for almost eight years and it was amazing, but I’m completely ready to do something new.

“I’m grateful the door was left open, obviously, but I’d love to do a dark Netflix series or a comedy. I want to challenge myself and do something completely different.”

Jacqueline’s due to give birth in the next few weeks.

It’s not been the easiest pregnancy, however, as she’s been faced with ongoing speculation about the state of her marriage to former TOWIE star Dan Osborne, 26.

They’ve been hit with rumours of a rocky patch, but in a recent interview with The Mirror, Jacqueline simply said nobody knows what happens behind closed doors and she won’t let anything stress her out.

She previously told OK! magazine: “People shouldn’t jump to any conclusions and I’m in the last few weeks of my pregnancy so I don’t need the stress.”