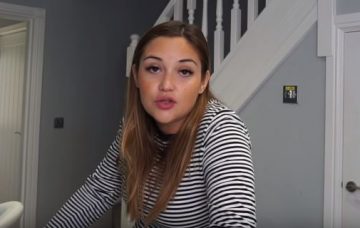 She's given fans a baby update in her latest YouTube vlog

Jacqueline Jossa has said her baby is due EARLIER than expected after discovering she’s a week further in her pregnancy than she thought.

The former EastEnders actress has recorded a new video for her Jacqueline’s World YouTube channel in which she reveals she’s actually 35 weeks pregnant, not 34 as she’d believed.

“I’m telling everyone I’m 34 and then I just found out I was 35 weeks pregnant which means I’ve just lost a week, which means I only have five weeks left!”

Jacqueline continued: “So, the baby could come at any time now! I need to get my baby room sorted, my baby bag sorted, I need to wash all the baby clothes.”

She joked: “I need to basically sort my life out!”

Jacqueline added that although she has “so much to do it’s not even funny”, she wants to remain relaxed in her final weeks of pregnancy – and knows just how she’ll achieve that!

She said: “Love Island is starting soon which is lovely. I get to watch that, which is nice. I am very excited about that as I feel it will be my build up and relaxation every night so I don’t panic about having this baby.

“It’s nice to have something to watch so thank you Love Island for that!”

Jacqueline’s been busy in the run up to giving birth: as well as having three-year-old daughter Ella to look after, she’s been working with Pampers on its Thank You Midwife campaign.

The campaign aims to encourage people to share their gratitude towards the midwives who helped deliver their children.

Jacqueline previously told fans: “Please everyone with babies that had wonderful midwifes get involved with this amazing campaign pampers are doing to make midwifes feel appreciated and valued for the amazing work they do!!

“A personal thank you to all the midwifes I have had along my pregnancy and to my birthing midwife, Jacqueline, who kept me calm and relaxed I’m my most crazy time, and helping delivering my angel Ella so perfectly.”

Jacqueline and ex-TOWIE star husband Dan Osborne announced a second baby was on the way at Christmas.

They already know the baby’s sex but haven’t made that public.

It’s been a stressful time for Jacqueline as she’s had to deal with ongoing speculation about the state of her marriage while heavily pregnant.

There have been rumours of a rocky patch and claims Dan moved out of the family home while the couple sorted their alleged differences, but neither Jac nor Dan has confirmed the claims.

In a recent interview with The Mirror, Jacqueline simply said nobody knows what happens behind closed doors and she won’t let anything stress her out.

Over the last week, Jacqueline has been seen wearing her wedding ring again, fuelling new rumours of a reconciliation, while The Sun claims Dan has now moved back into the marital home ahead of the birth.