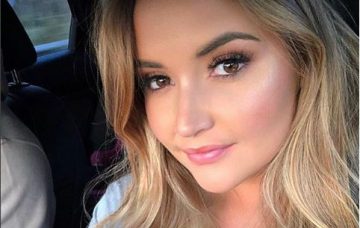 If you need something to warm your heart on this cold day, have a look at Jacqueline Jossa’s adorable family pictures.

The actress took to InstaStories on Monday evening to share a series of videos and images of herself cuddling up and playing with her three-year-old daughter Ella, alongside husband Dan Osborne.

In another, she showed Ella, who is big sister to baby Mia, three months, hugging their dog, Storm.

The former EastEnders star also added several adorable videos of herself preparing for bath time with her daughters.

In one photo, Ella grins widely. Her mum captioned it: “SHE’S READY”.

Dan, 27, who is also dad to son Teddy, four, from a previous relationship, also posted his own slice of family life.

He shared an adorable video of baby Mia laughing, captioning it: “Mia’s first little laughhh 😊💗💗💗 first thing she laughs at… is kicking daddy in the face 🤨😏 they love beating daddy up! 🤣💗”.

Mia’s first little laughhh 😊💗💗💗 first thing she laughs at… is kicking daddy in the face 🤨😏 they love beating daddy up! 🤣💗

It followed Monday’s lovely news that the pair have reunited, after going through a “bad patch” earlier this year.

The couple, who began dating in 2014 and tied the knot last year, split back in May after experiencing difficulties in their marriage.

But the birth of Mia in June, and Dan’s subsequent stint in the Celebrity Big Brother house both worked to bring the pair back together and now they’re “stronger” than ever.

In an exclusive interview with OK! Magazine, Jacqueline confirmed: “Our wedding rings are firmly back on and we’re stronger than ever.”

Former TOWIE star Dan added: “It’s no secret that we went through a bad patch, but we’re back together and things are really good. We split up earlier this year but started to get back on track when Mia was born in June and it’s better than ever between us now.”

We love these two, and delighted to see them so loved up. Long may the cute selfies last.

Are you happy to see these two back together? Leave us a comment on our Facebook page @EntertainmentDailyFix and let us know what you think.