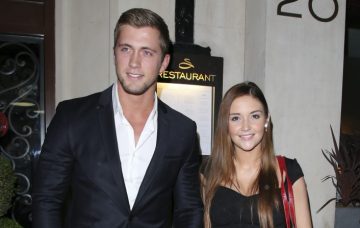 Dan opened up about "hard times" in the CBB house

The former EastEnders actress shared a string of pretty pictures to her Instagram Stories amid fresh headlines about the current state of her marriage.

Jacqueline, 25, looked stunning as she posed in a pretty black floral dress and hat.

She shared one particularly lovely snap taken by eldest daughter Ella, three, proving the little one certainly has an eye for a good picture already!

Jacqueline posted her holiday snaps – including one of Ella – on the same night Dan opened up about their relationship on Celebrity Big Brother.

In a private chat with former Emmerdale star Roxanne Pallett, the ex-TOWIE star said he’d been inseparable from Jacqueline when they first met.

Dan said: “We met and we spent every day together for months.

“We had our hard times and stuff. We had a spell when we lost that friendship.”

The 27-year-old went on to say that the birth of the couple’s second daughter Mia in June that brought them closer together again.

“Once we had Mia, we started getting on,” he said.

Dan and Jacqueline began dating back in 2014 before tying the knot last year.

But ahead of Mia’s birth, they experienced a rocky patch that saw Dan briefly move out of their marital home.

Before he entered the CBB house last week, Dan had hinted things were back on track with Jacqueline and they were working through their previous issues.

Dan also said Jacqueline told him to “be yourself and enjoy” his time on Celebrity Big Brother.

She has not publicly commented on his CBB stint at all yet.