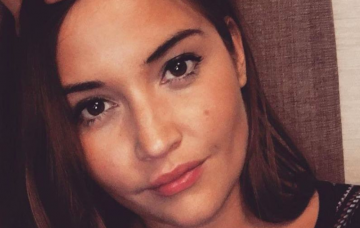 Jacqueline Jossa has got some good news for EastEnders fans!

More details about her exit have emerged...

It’s no secret that EastEnders actress Jacqueline Jossa will be bowing out of the soap shortly – but the good news is she’s still on our screens until February.

After it was announced last year that both Lauren and Abi Branning would be leaving the show, EastEnders hinted that the pair would be departing  over the festive season.

And, lets face it, when Lauren and Abi plunged from the roof of The Vic, it looked like that was their exit storyline right there.

But fear not – we have still got a few more weeks of Lauren on our screens, and it’s likely those few weeks won’t be without drama.

Read more: EastEnders SPOILER: Devastation for the Brannings as Abi’s life support is turned off

During a Q&A session on Instagram live last night, the actress revealed that her final scenes will be aired next month – but remained frustratingly tight-lipped about the exact date she will be leaving Walford.

Jacqueline’s on-screen sister, Abi, is set to leave on Friday 19th January when the Brannings make the heart-wrenching decision to turn off her life-support machine.

But despite her sister being gone, Lauren lives on to see a few more weeks in Albert Square – and will be attending her sister’s funeral before she leaves.

Pap pictures have been released showing Jacqueline, along with other cast members (bizarrely including Lorna Fitzgerald, who plays Abi) filming the scenes for Abi’s funeral recently.

It still remains to be seen whether Lauren will depart with new love interest Josh Hemmings as originally planned back at Christmastime, or whether something entirely different leads to her dramatic exit from the show.

Let’s face it – falling from the roof of a pub and surviving the impact has got to give you a whole new outlook on life, hasn’t it?

Speaking to Digital Spy back in December about her exit, Jacqueline said: “We were super prepared, but we just wanted to know how we would leave. We wanted to know what the storyline was going to be.