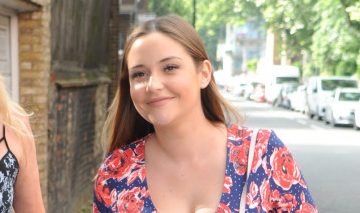 She gave birth to her second child on June 25

Jacqueline Jossa has returned to social media following the birth of her second child.

On Wednesday night, the former EastEnders actress posted her first selfie since giving birth to daughter Mia on June 25.

She shared the snap to Instagram Stories alongside a message thanking fans for their well-wishes on the safe arrival of her second daughter with husband Dan Osborne.

She added: “Thanks so much for all the love and support and messages I’ve had from you bunch. It’s so lovely!”

The soap star, 25, announced her daughter’s birth via Instagram two days ago, posting a stunning picture of elder daughter Ella, three, meeting her sister for the first time.

Jacqueline wrote as the caption: “My little family is complete! Mia Osborne is so beautiful! The birth went well and I can’t thank my family enough.

“Me and baby are healthy and resting now. Welcome to the world baby girl! 💞 Ella is the best big sister! So caring and sweet. Thanks for the kind messages, love to you all! X.”

Ex TOWIE star Dan, 26, also confirmed the birth on his own Instagram page, sharing a separate photo of Ella and Mia.

Dan is also dad to son Teddy, four, from a previous relationship.

Further photos showed Dan with Teddy, Ella and Mia, captioned: “This is what ‘complete’ feels like ❤ all of my incredible, beautiful children together 😊 feel like the luckiest man on earth 😊💙💗💗.”

The couple announced a second baby was on the way at Christmas and had already confirmed it would be a girl before the birth.

It hasn’t been the easiest few months, however, as their marriage was rocked by claims Dan had moved out of the marital home following a string of rows.

Both Jacqueline and Dan refused to be drawn on the gossip, with Jacqueline previously saying her focus was on the baby.

She told The Mirror: “These things happen. Marriages have ups and downs and mine’s no different. He’ll be at the birth, of course. He’s an amazing dad.”

What do you think about Jacqueline and Dan’s baby name choice? Leave us a comment on our Facebook page @EntertainmentDailyFix and let us know what you think!