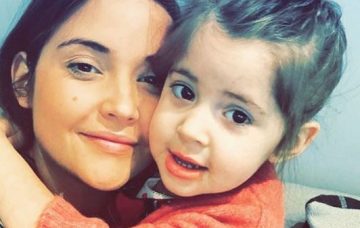 The former soap star is 35 weeks pregnant with second child

Jacqueline Jossa has recalled her midwife’s advice to “stop the dramatics” while giving birth to daughter Ella.

The former EastEnders star welcomed her daughter three years ago and, as it was her first child, admits she had no idea what to expect during labour.

In the latest vlog for her Jacqueline’s World YouTube channel, the soap star spoke about her new campaign to raise awareness of the work done by midwives, and how she benefitted enormously from her own midwife’s calming yet authoritative demeanour.

Jacqueline, who is 35 weeks pregnant with her second child, recalled: “I turned up all huffy and puffy and throwing up everywhere, probably all over her as well, and straightaway she was so calming, so relaxed.

“It definitely helped me out because obviously it was my first baby and I didn’t know what was going on, so you need someone who knows what’s going on.

Jacqueline said she immediately felt a “connection” to her midwife as they both shared the same name, saying she put all her trust in the professional.

“She was an amazing, amazing woman,” said Jacqueline. She wasn’t too in my face, she definitely took a back seat and then, when I needed to kick up a gear, she came in and was like, ‘This needs to happen now. You need to listen to me.'”

Jacqueline admitted being “a bit cray cray” towards the end of her labour and said: “She came down to my level and said to me, ‘Jacqueline, you need to calm down now and stop the dramatics. Just breathe. If you carry on like this you’re not going to have enough energy to push. You’re wasting your energy for the wrong reasons. If you listen to me, within 20 minutes your baby will be here.'”

Jacqueline’s been busy in the run up to giving birth of her second child working with Pampers on its Thank You Midwife campaign.

The campaign aims to encourage people to share their gratitude towards the midwives who helped deliver their children.

Jacqueline previously told fans: “Please everyone with babies that had wonderful midwifes get involved with this amazing campaign pampers are doing to make midwifes feel appreciated and valued for the amazing work they do!!

“A personal thank you to all the midwifes I have had along my pregnancy and to my birthing midwife, Jacqueline, who kept me calm and relaxed I’m my most crazy time, and helping delivering my angel Ella so perfectly.”

“I really appreciate it and honestly, I wouldn’t have been able to do it without you.”

Jacqueline and ex-TOWIE star husband Dan Osborne announced a second baby was on the way at Christmas.

They already know the baby’s sex but haven’t made that public.

It’s been a stressful time for Jacqueline as she’s had to deal with ongoing speculation about the state of her marriage while heavily pregnant.

There have been rumours of a rocky patch and claims Dan moved out of the family home while the couple sorted their alleged differences, but neither Jac nor Dan has confirmed the claims.

In a recent interview with The Mirror, Jacqueline simply said nobody knows what happens behind closed doors and she won’t let anything stress her out.