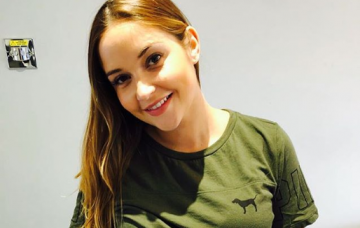 Jacqueline Jossa has shared sweet new snaps of her baby daughter after becoming a proud mum for the second time.

The former EastEnders actress welcomed Mia at the end of June with estranged husband Dan Osborne and now she’s delighted her fans by sharing snaps of how the little one is growing.

Taking to Instagram account, she shared an image of the newborn in her cot with her eyes wide open and her dark hair spiked up, captioned “Baby love” with a heart emoji.

Hundreds of Jacqueline’s fans commented to say how cute they thought the picture was and it quickly gained 61.5k likes.

“One of the cutest babies I’ve ever seen,” one follower declared.

“Oh my goodness Mia you’re so beautiful,” said another.

Others commented to say how much they thought Mia looked like her big sister, Ella, three.

“Double of Ella,” one wrote.

“She looks like her sister so much,” agreed another.

Others could see the resemblance with her former TOWIE star dad.

“Omg double of her dad!! Little doll,” wrote one.

“Omg she looks so much like Dan,” said another.

“Image of Dan,” agreed a third.

Jacqueline shared further photos of Mia on her Stories, showing a cute moment between her and her big sister as Ella tucked her into bed.

“Are you warm?” Ella can be heard asking her as she gently lies a sheet over Mia.

Capturing a picture of Mia with Ella sat at the end of her cot, Jacqueline wrote: “Goodnight from my girlies.”

Meanwhile, Dan has also shared a new snap of his daughters.

He posted a picture on Instagram of Ella giving Mia a cuddle as she lies on his bare chest in bed.

“My girls,” he captured the image.

Dan moved out of the family home before Mia’s arrival as he and Jacqueline hit a “rough period” in their marriage.

Jacqueline told OK! magazine last month: “We’ve been through a rough period but right now we’re getting on well. Neither of us knows what’s going on at the moment but we’re spending time together and seeing how things go.”

Last week it was reported that Dan could be taking a break from daddy duties to appear on Celebrity Big Brother.

The Sun reported that he’ll be joined by Love Island’s Gabby Allen, with whom he was accused of having a fling with earlier this year, in the series themed on controversy.

After the news was announced, Jacqueline posted a cryptic tweet about how the “industry can ruin and hurt people” which she later deleted.