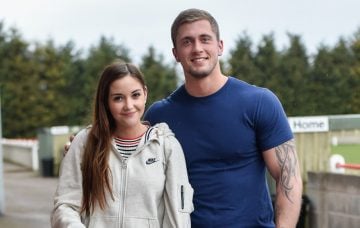 Jacqueline Jossa has shared a loved up new picture with husband Dan Osborne, seemingly dismissing claims of a recent row between them.

The former EastEnders actress, 25, posted a sweet shot to Instagram on Sunday night showing her cuddling up to Dan, 27, as they enjoyed a meal at a fancy London restaurant.

Her caption simply read: “My love.”

The picture seemed to dismiss a recent claim they’d rowed over Jacqueline not attending the Celebrity Big Brother finale in person to support Dan.

Sources had claimed they’d exchanged words when Dan realised Jacqueline wasn’t in the audience to greet him, although a rep for Jacqueline told The Mirror the situation had been quickly resolved.

A rep said: “She was not at the final at Elstree Studios as she did not want to be on TV. Dan was upset Jac wasn’t there but all was sorted amicably and the situation quickly resolved. Jacqueline is very proud of Dan’s achievements in the house.”

Former TOWIE star Dan is just getting back into the swing of regular life after spending three weeks cooped up inside the Celebrity Big Brother house.

He entered the famous compound on August 16 and emerged in third place last week.

It meant he was away from Jacqueline and their daughters Ella, three, and baby Mia, born in June, for a significant period of time, as well as four-year-old son Teddy from a previous relationship.

The couple’s marriage went through a rocky patch ahead of Mia’s birth, with Jacqueline admitting in an interview earlier this month they weren’t “officially back together” when Dan entered CBB.

He had moved out of the family home a few months previously, but had moved back in ahead of his Big Brother stint.

She told OK! Magazine: “We’re not officially back together but he’s living with us so we spend every day together, and we’re getting on really well.”

Jacqueline added: “It’s hard for me to discuss my relationship when we haven’t had a chance to talk about it properly. I don’t know what the future holds. Dan is my family and no matter what goes on in our marriage that won’t change.

Judging from the sweet selfies the pair have been sharing since then and their smiles, it looks like Dan could be getting the fresh start he hoped for…