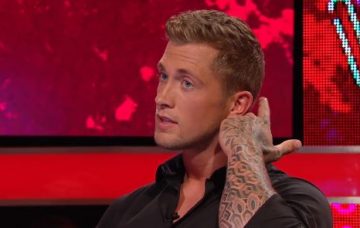 He finished CBB in third place

Dan Osborne has said being away from Jacqueline Jossa made him realise the “mistakes” he’s made in their marriage and joked he hopes she’s “still talking” to him.

The former TOWIE star, 27, entered Celebrity Big Brother in the wake of a highly-publicised rocky patch with Jacqueline, 25, who has just given birth to their second child.

Even Jacqueline admitted the timing of the show wasn’t ideal as it meant Dan leaving the family for nearly a month as they tried to work through their difficulties.

Dan finished CBB in third place on Monday night and told Emma Willis the show had given him time to think about his marriage.

When asked if the show will give him a “fresh start” with Jacqueline, Dan said: “I hope so. I hope she’s still talking to me after this! I didn’t know how it would be, what would be on TV, but I hope so.

“I know it’s changed me a lot as a person for the better. I’ve definitely seen what I’ve done wrong and all I want is a happy home for all of my family, kids and I obviously want my wife to be happy as well.”

Dan needn’t have worried about Jacqueline, though, as she’s been very active on social media whipping up support for Dan and encouraging fans to vote for him.

She chose not to attend the finale but watched from home, sharing a photo to Instagram Stories with her friends cheering on Dan when he finished in third place.

Jacqueline allowed eldest daughter Ella to stay up to watch her dad on Big Brother, sharing a sweet photo of the little girl cheering him on.

Jacqueline previously said of Dan: “Okay. He’s made it to the final and I am so happy for him. Imagine if he wins. He’s changed a lot of people’s opinions and deserves this moment.

“His kids miss him but to have daddy win would mean the world to them. I really hope he does.”

Dan, meanwhile, told Emma: “I know I’m not perfect, I don’t think anyone is, but having time in there makes you appreciate what you have, and the time I have with my children.

Dan said he “really struggled” not being to speak to his children every day, but tried to keep his emotions to himself as he “didn’t want to bore people.”