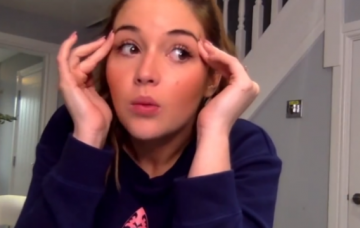 She didn't want her to know she'd 'done it'!

Jacqueline Jossa has admitted she was “terrified” about telling her mum she was pregnant again because it was evidence of her sex life with husband Dan Osborne!

Yes, despite being married and already having a daughter with the TOWIE star, Jacqueline confessed she still felt “ashamed” of the thought of her mum knowing they’d been intimate between the sheets.

The revelation came as the former EastEnders actress did a Q&A on her new YouTube channel, Jacqueline’s World.

The 25-year-old is hoping to have a new career as a vlogger after she was recently axed from the soap, where she played Lauren Branning.

One fan asked her: “How did you feel when you found out you were pregnant with your second? Were you both scared, worried etc?”

Jacqueline replied: “Yes! Well, yes I was! I was terrified. Which is weird, I always thought I wouldn’t be.

“But I felt exactly the same before, I was like, ‘I’m not telling my mum’.

She continued: “Even though, you know it’s pretty obvious now, you go into a different mode like, ‘I’m not telling anyone, I’m ashamed, what do I do? Oh my God, people are going to know, you know, what happens when you make a baby’.”

She added she knew it was “stupid” as “it’s obvious when I have already got one but you just go into that frame of mind”.

Jacqueline, who is already a mum to three-year-old Ella and step-mum to Dan’s son Teddy, four,  is currently 22 weeks pregnant.

She previously admitted they had both been shocked when she had a positive pregnancy test as they hadn’t been planning on expanding their family just yet following their June 2017 wedding.

The star had been planning on trying to land new acting roles after finding out her time on EastEnders was coming to an end.

Read more: Victoria Beckham shares rare pics of her children before school as she calls herself a “terrible mother”

“My plan was to come out and get another job quickly, and obviously that’s been halted,” she told her Vlog viewers.

But she added she’s now delighted by the prospect of becoming a mum again.

“Then quite quickly I thought this is a lovely age gap and Ella will love it,” she said.

Did you feel the same way as Jacqueline when you discovered you were pregnant? Leave us a comment on our Facebook page @EntertainmentDailyFix and let us know what you think!