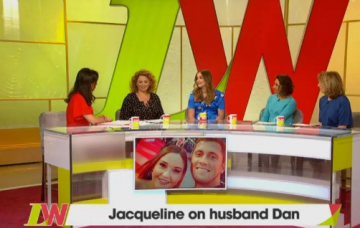 She and Dan have reportedly split but actress insists she's fine

Former EastEnders star Jacqueline Jossa has said she is “all good” while addressing reports of relationship trouble with husband Dan Osborne.

The actress is due to give birth to their second child together at the end of June, and it was recently claimed that she and former The Only Way Is Essex star Osborne had split.

“I think with stuff goes on at home, it’s not normal to be everywhere and it’s not necessarily true, all the reasons why you’re not getting on at the moment, so that’s all I really want to say.”

Earlier this week, Jossa commented on the reports, tweeting: “No one needs to comment and get involved in things they don’t know anything about.

“Daniel and I are dealing with things privately as a team, there is always 2 sides to every story.

“Stop with the nasty comments, no one deserves them. Trust me privacy please x.”

It was claimed by The Sun Online that 26-year-old Osborne had moved out of the couple’s home after a series of rows.

Jacqueline, who played Lauren Branning in EastEnders from 2010 until earlier this year, revealed in January that she is pregnant.

She and Dan have a three-year-old daughter Ella together, and Dan also has son Teddy from a previous relationship.

Jossa also told Loose Women that she felt that she had gone back to work too early on EastEnders shortly after giving birth to her first child.

“I took a year off but went back three months afterwards for a month to film the ending of a story, they needed me for something story-wise, and I did feel like it was too soon,” she said.

“For me, I constantly missed Ella. I felt really guilty and I hated everybody.”

Do you wish you’d had longer for maternity leave? Leave us a comment on our Facebook page @EntertainmentDailyFix and let us know what you think!