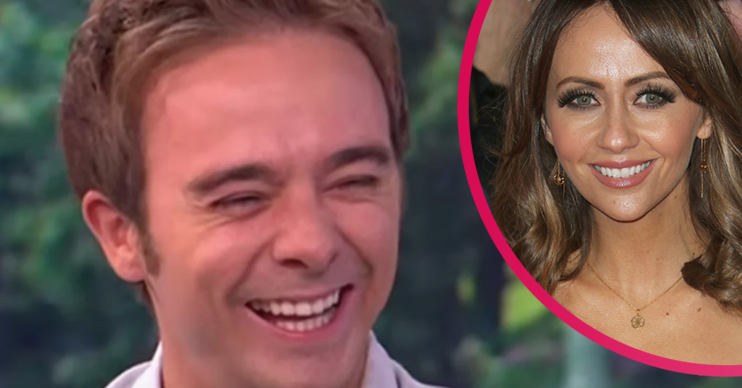 Taking to social media the actor shared a series of photographs of them together.

This was coupled with various popular songs that reference Maria.

Blondie’s Maria blasted through one as did Santana’s Maria Maria on another.

One throwback snap shows them chowing down on pizza in between filming takes… it’s clear the co-stars have a close friendship.

Another image shows David’s awkward attempt to kiss Maria back in 2018.

When David was still reeling from his rape ordeal with Josh Tucker, he made a bungling pass at Maria.

Disgusted she rejected his advances and Jack shared a snap of their encounter on his stories.

He jokingly captioned the snap with: “I’m so sorry.”

He then shared an even earlier snap of Maria leaning into David – who has a decidedly evil smirk.

Read more: Helen Flanagan shows off new look as daughters do her make-up

For this classic snap he wrote: “You’re such a lucky girl.”

And finally he posted a pair of them chatting together with: “Thank you for working with me for 20 years. Lots and lots of love.”

Despite Jack’s joking, Samia actually said in 2018 that she thinks David and Maria would make a good couple.

The actress said on This Morning: “I’m campaigning for David to get together with her, because she and David should just crack on.

“I’m getting loads of messages on Twitter saying she and David should just get together.”

She went on to detail their close friendship.

“So we have literally grown up together. It’s lovely because we are so at ease with working with one another.”

However, actors and crew are still required to maintain social distancing on set.

The popular ITV soap had to suspend filming for 11 weeks due to lockdown and the coronavirus pandemic.